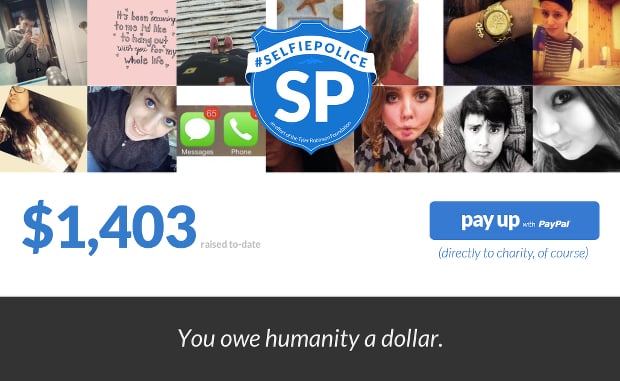 With a name like SelfiePolice and a tagline like ‘you owe humanity a dollar,’ we have a feeling the charitable organization Selfie Police is going to go far — in fact, we really hope it does.

Created by a group of BYU students who wanted to make a difference in the world, Selfie Police is a website/organization/movement that ‘fines’ you a dollar for each selfie, and then donates that dollar to Vittana — an innovative organization dedicated to fighting world poverty by giving college aged kids in third world countries student loans.

Obviously these fines aren’t so much fines as they are requests, but it was the most creative way that the site’s creators could come up with for engaging with our self-obsessed generation in a positive way.

“When we first came up with the idea we were trying to think of how to engage our generation in giving,” says co-creator Chas Barton. “It’s tricky because we’re such a selfish generation, so the question we asked was not how do we make our generation charitable, but how do we turn selfishness into charity. That’s where Selfie Police was born.” 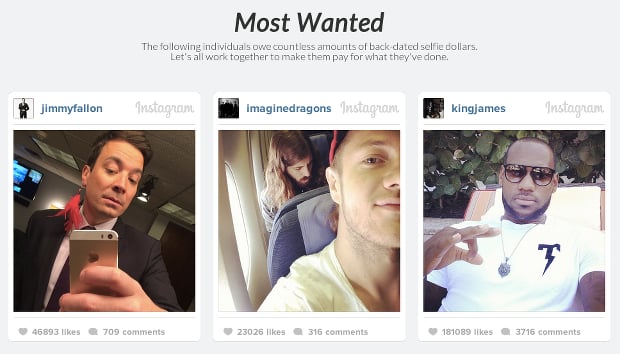 The website encourages you to break even on your own infractions, and then go out and ‘accuse’ your friends and family by leaving comments on their selfies that persuade them to do the same.

Here’s what you’ll find if you visit the Selfie Police website, either on your own or because one of your friends directed you there to pay up:

On behalf of humanity, you are hereby fined $1 per selfie on charges of self-obsession. All the money goes to fund education for kids who can’t afford college, let alone a $600 self-indulgence device. Donate and join us. Police your friends. There’s a lot of work to be done. Together we can turn vanity into charity.

To learn more about Selfie Police or the charity they donate to, head over to their website by clicking here. And from now on, remember to drop a #selfiepolice hashtag or link in the comments every time you see one of your friends commit an infraction. Either this will eradicate selfies or lead to an ongoing stream donations to a good cause… we’re not sure which we would prefer.

DIY: Take Wireless Control of Your Canon DSLR Using a $30 Router and Android

9 [More] Adventure Sports Photographers You Need to Check Out