We’ve seen photographs of wildlife that run the gamut from cute to ‘Far Side,‘ but it’s important never to forget that wild animals are, after all, wild… and therefore dangerous. One photographer was reminded when he found himself in a tense standoff with a young bull elk on the side of the road.

The altercation happened in the Cataloochee Valley of Great Smoky Mountains National Park, when a bull elk decided to start the day by starting some trouble with a nearby photographer.

According to the video description, the photographer in question had been keeping a respectful distance when the curious elk took notice and walked up to sniff his camera gear. So far so good. The problem started when the elk became more aggressive, lowering his antlers and full-on headbutting the poor photog. 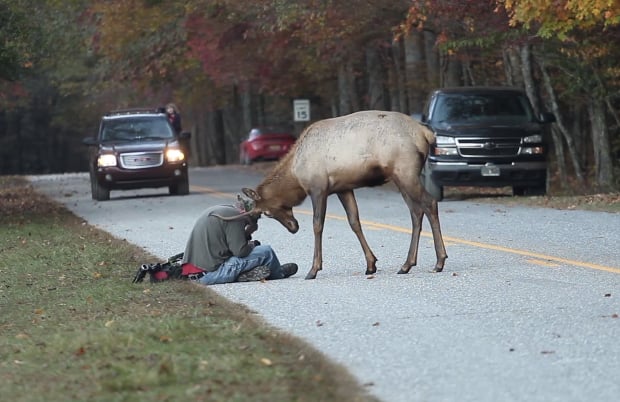 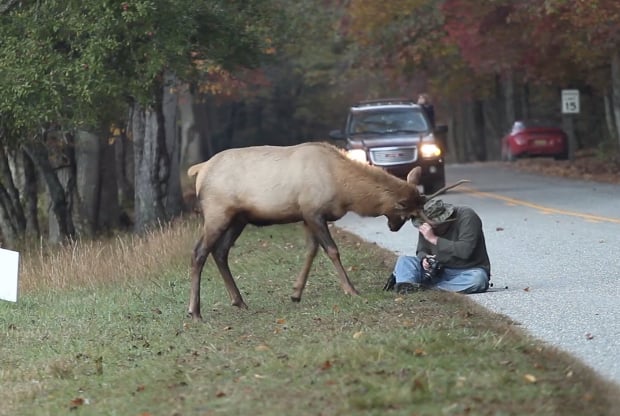 The photographer who shot the video later emailed the photographer in the video to ask why he decided to sit there for minutes on end while the elk continued to headbutt him. Here’s his response:

My first thoughts were “wow, he’s getting pretty damn close here.” But I’ve been up close before without incident. I hoped being still and passive would see him pass on. When he lowered his antlers to me, I wanted to keep my vitals protected and my head down. I felt that standing up would provoke him more and leave me more vulnerable to goring.

I think that while protecting myself with my head down, having my head down was a signal that I was rutting with him. I was concerned at first, but when he started rearing back and lunging at me later on, I got scared and pissed off. That’s when I wagged my finger at him to cut that s*** out. I was relieved to see the Ranger coming.

So what, if anything, is the lesson here? Probably: be careful and keep your distance. We’re just thankful the Ranger showed up before the elk got any more aggressive, because this could have gotten very ugly very fast.

For his part, the photographer seems to have escaped with his sense of humor intact. At the end of his email, he quipped that, “at least he took me for a buck and not a cow!”

NASA Releases First Ever Photo of Saturn, Venus, Mars and Earth in the Same Shot

Snapchat Supposedly Turned Down a $3 Billion Acquisition Offer from Facebook