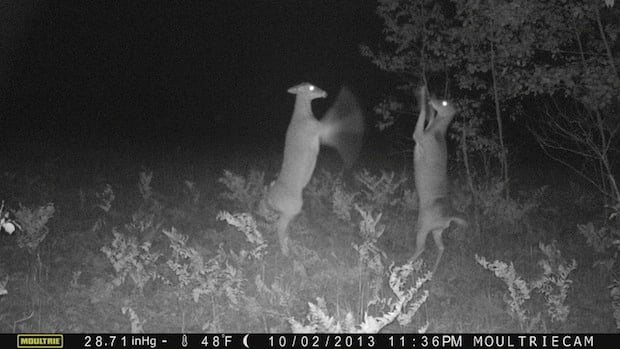 Thanks to remote wildlife cameras, we’ve been treated to a veritable bear hoedown at the local scratching tree, and now we also have the following footage which captured what seems to be a cartoon-like slap-fight between two wild deer.

The footage was captured by Redditor TheSaucerBoy, who has been installing remote cameras in the woods for 5+ years without ever getting anything quite as amazing as this set of photos captured recently in Northern Michigan:

When he saw what he had caught on camera, he immediately uploaded it to Reddit where the folks there immediately upvoted him to kingdom come and started trying to caption the GIF in interesting and hilarious ways. Our favorite was probably “Come at me Doe!”

When we caught up with TheSaucerBoy over email, he confided that this footage almost didn’t happen. It was captured by a Moultrie M-990i camera that had only been up and running for a couple of days. All we have to say is: boy are we glad it was installed in time.

And as for TheSaucerBoy? He’s actually out camping this weekend in the same area where this footage was captured. Given what we’ve just witnessed, we hope he’s armed… those deer look like they mean business.

Image credits: Photographs by TheSaucerBoy and used with permission.

Are Selfies Killing the Photo Album?