Update: The Associated Press has re-released the photos, and is now confirming that they DO show scenes related to the Navy Yard shooting. 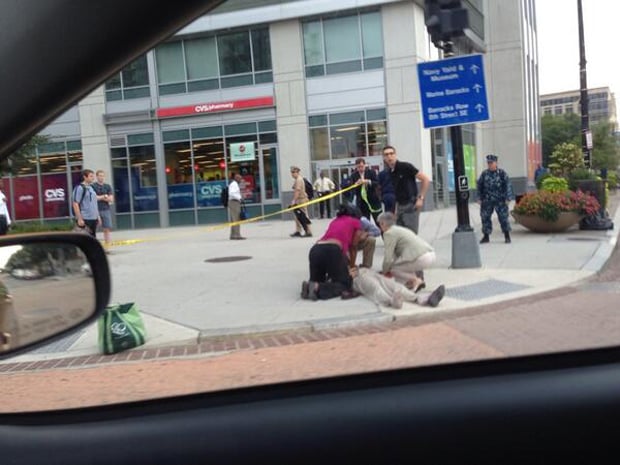 A widely distributed image used to illustrate stories about Monday’s horrific shooting at the Washington Navy Yard likely had nothing to do with the tragedy, offering a cautious tale of modern media overreach.

Don Andress, an aide to Rep. Steve Horsford (D-Nev.), actually grabbed two dramatic images that show a man lying on the ground while passersby attend to him a few blocks away from the Navy Yard shortly after news of the shooting became known. He assumed the stricken man was a shooting victim and shared the photos with colleague Tim Hogan.

Hogan shared the images on Twitter, where both photos immediately went viral.

Another photo from the scene. Our staff is safe. #NavyYardShooting pic.twitter.com/qfBgR6Fmpv

With few images coming from the scene due to a security lockdown, both photos (and in particular the first one) were soon being retweeted hundreds of times and drawing messages from numerous media organizations interested in using them. Hogan gave them permission but warned: “I can’t confirm details re: nature of photo. Happened block away from Navy Yard. Staffer took shot.”

The Associated Press posted the photo at 11:22 a.m. Eastern time, listing it as “authenticated.” About 90 minutes later, it issued an update saying the photo was being “investigated.” Four more hours passed before the AP finally pulled the image with a note that it had been unable to confirm the picture was related to the shooting and advising subscribers not to use it.

From one of our staffers sheltering in place in SE DC. #NavyYardShooting pic.twitter.com/UNcWqRLExY

By then, however, the image was already posted on numerous outlets covering the tragedy, with few including any disclaimers.

Paul Colford, director of media relations for the AP, acknowledged to The Atlantic that the agency was hasty. “We should have vetted the circumstance shown in these photos more carefully.”

Meanwhile, it’s still unclear exactly what the photos show. Those familiar with the area, however, pinpointed the location as a pharmacy nearly half a mile from the building where the shootings occurred. And there’s not a trace of blood on the ground.

The leading theory at this point is that the man had a heart attack, which might or might not have been related to shock from the shooting.