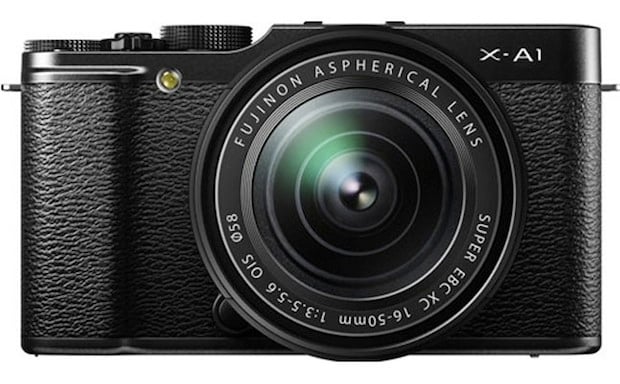 Up till now, we hadn’t heard much in way of specs for Fuji’s rumored entry-level X-Series camera, the X-A1. We knew it was going to be a step down from the X-M1 and a step up from the X100, and we’d seen a questionable picture, but that was it.

A Czech site changed all that yesterday, however, when they accidentally published both a press release and more photos of the upcoming shooter.

The site took down the page soon after it went up, but not before Fuji Rumors copied down the Google Translated press release and snagged the photos. It seems in their rush to announce Fuji’s new 23mm XF-Series lens, Czech site FotoSkoda accidentally published more press releases than they intended. According to the release, the soon-to-be-announced shooter will boast a 16MP APS-C CMOS sensor (as previously reported, not X-Trans), an EXR II image processor, a 3-inch vari-angle LCD, ISO up to 25,600, a built-in flash and built-in WiFi.

Fuji is also quick to mention (pun forthcoming) how speedy the entry-level camera will be. Apparently, it will feature a startup time of just 0.5 seconds, shutter lag of only 0.05 seconds, and a max speed of 5.6fps in burst mode.

Design wise, the camera will be available in the retro-styled black, blue and red you see pictured above. No word on pricing or availability, but we assume the official announcement isn’t far off if people already have press releases ready to go.

(via Fuji Rumors via Photo Rumors)

Photo Tip: Replacing Emotion with Logic When Viewing and Printing Your Photos