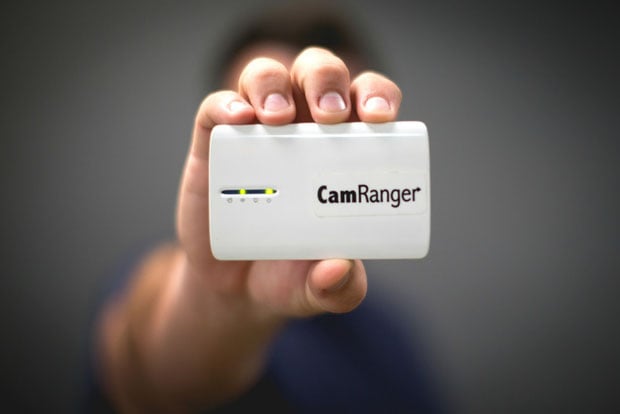 When I first heard of the CamRanger in October of 2012 in New York City at PhotoPlus Expo I was immediately intrigued.

I don’t actually own a laptop, so tethering to an iPad tablet has been a long awaited process with trial and error. My first experience was with the Eye-Fi Wireless SD Card; a memory card you place in your camera, the card transmits a wireless signal and supposedly you connect to that signal source, boom, you’re tethered. Except it didn’t really work.

Even set to low-res JPEG, transfer times were grossly long. Also, conflicting signals would constantly kick the connection. Among the many times I tried to make it work, it actually performed as it should twice.

When I saw the CamRanger and all it could do, I was severely skeptical. However, I couldn’t help the excitement. I pushed for Outdoor Photo Gear to stock the product and as soon as the demos arrived I grabbed one and went to work. What I found was not only a flawless tether and transfer but also a multitude of options and control. I’ve had it for nearly 6 months now and it’s become such a crucial piece of gear that I’ve had to actually rely on it, both for capture and client.

It’s all a very basic setup. The physical CamRanger is a palm size white dongle that connects to your camera via USB cable. That device then creates a wireless signal which your iPad, Android, laptop or PC can connect to and there is no need for an existing Internet connection.

The free application, which CamRanger offers with the purchase, provides complete control of your camera — and I mean complete control. The device is provided with a padded black satchel to carry or clip the device to your belt or tripod. The CamRanger runs on a rechargeable and replaceable battery, which will run 12 hours of usage before requiring a charge.

After registering the software with the dongle, the app opens to a very clean interface that’s extremely easy to use. On the right, my camera settings, I can switch into live view or focus and even fire my shutter. On the top menu I can easily switch to bracketing, focus stacking and even time lapse, all with one touch.

Diving deeper into options, the ability to rate images and even make notes has become a really exciting feature for clients. Transfer time is quick, If you’re shooting RAW + JPEG CamRanger will only download the JPEG and transfer time can run about 3-5 seconds. If you shoot in Continuous, simply turning off the feature “Auto Thumbnails” will prevent the build up of images downloading. However, the images don’t actually download to your iPad, they are simply “streamed” right from your memory card.

With that said, it’s more of a viewing and control platform than tethering system, which I’m perfectly fine with. After all, who would really want to re-touch a set of images on their iPad with their finger? Not me. 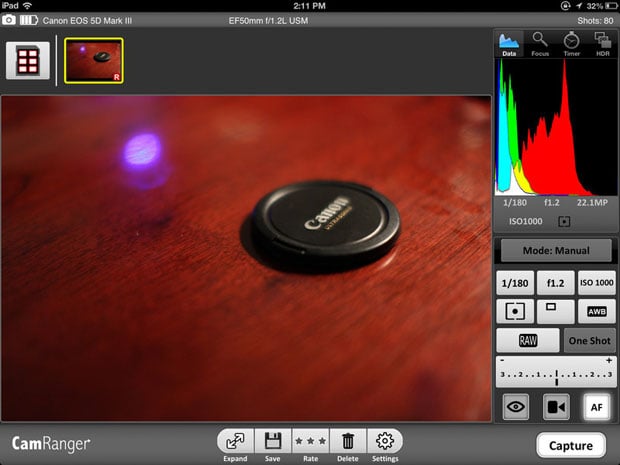 I was hired to shoot a cover feature for a Louisville publication called NFocus Louisville. They wanted to put a unique aesthetic on Louisville’s theater and arts community and wanted a massive group shot, but not your traditional group shot. Knowing the dimensions of the large format cover and weighing in options, I threw out the idea of shooting the actors and their “characters” from directly overhead on a theater floor. With the help from creative director Gunnar Deatherage we formulated a plan and scouted Whitney Hall at the Kentucky Center For Performing Arts. 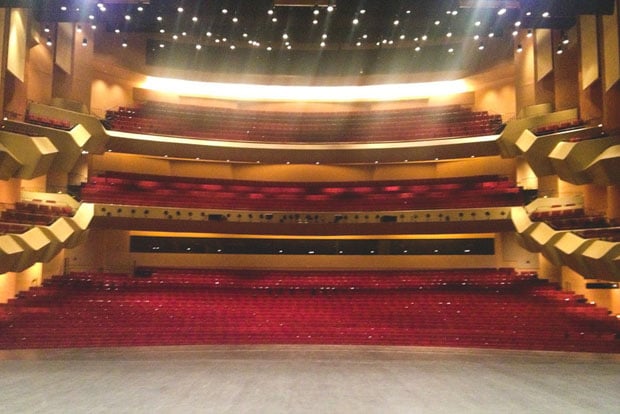 During the scout, I was sort of taken aback by the fact I was walking on the stage of which I had seen a number of touring Broadway shows. The stage was huge and lighting was plentiful. Luckily, they had a great staff who led us on the few catwalks hanging over the stage, some 60 feet over head. However, the catwalks were not completely overhead, so we made arrangements to use a combination of a lift and boom stand on the stage floor. I wasn’t completely confident that we could make it work, but one thing I did know is that I could fire my camera remotely with ease and could see the results in real-time. 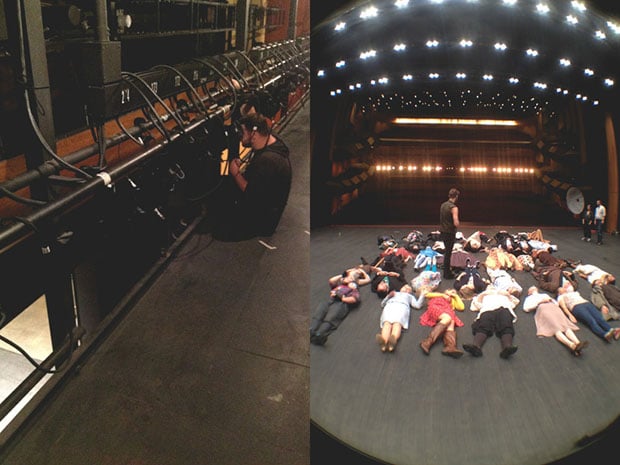 The day of the shoot, we arrived early to setup. I began explaining what I wanted in the image with Terry, a staff production and lighting engineer. I described my gear list and we came up with the brilliant idea of rigging my camera to one of the lighting poles which could be lifted directly overhead. I was ecstatic and that is exactly what we did. With the help of some gaffers tap, metal rods and a few security lines including the Vulture Equipment Works A4 camera strap, we rigged the camera to point straight down. Lastly, I secured the CamRanger to the camera and set my focal length to 35mm as Terry lifted it 60 feet. 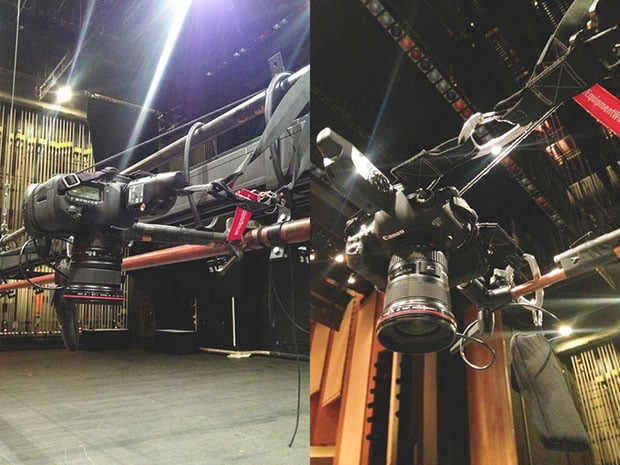 I switched on the iPad and set the CamRanger to live view, we went to every 4 corners and marked position with white gaff tape. This would be where the actors and actresses would lay. As long as they we’re inside the “zone”, they would be properly framed. Once the camera was rigged Terry brought up the house lights to 90%. Although it was flat light, it was more the enough to fill and provide a well lit shot. I fired a few test shots with the CamRanger app and everything was displaying as it should, I tweaked a few settings including ISO and shutter then “radioed” over to Gunnar to escort the subjects in. I headed up to the catwalk overhead to get an idea of posing. 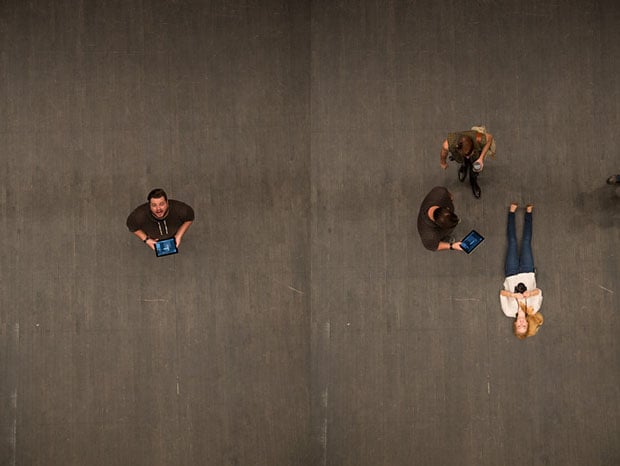 As we began situating the group into their positions, we’d have to carefully move people around to make clothing, shape and their character pose work with the next person. We wanted it to resemble a child who had laid out his or her action figures on the ground. Not perfect, but organized. Once everyone was set I traveled back down to the stage floor and began snapping away. 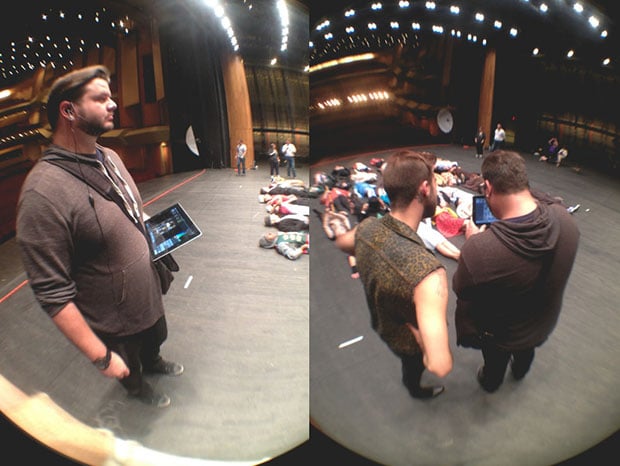 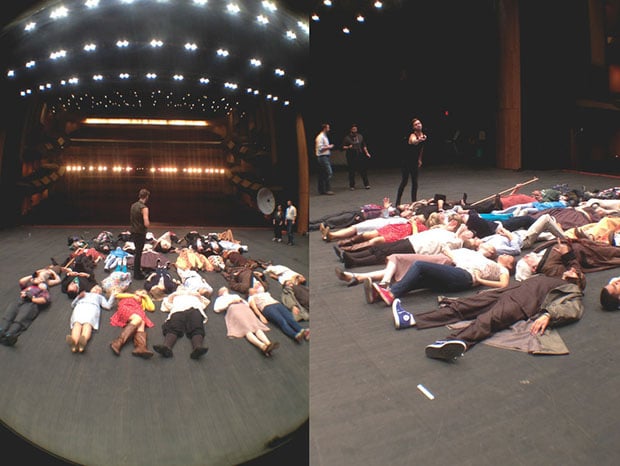 You could hear the shutter fire every time I touched the “Capture” button in the CamRanger app. I switched to Continuous Mode, again right from the app, and rattled off a series of bursts to guarantee I had an image. The shoot wrapped to applause and the publication was floored and very happy with the results!

I went back to Whitney Hall for a second shoot the following week and struck up a conversation with the production head, Peter Bell. He was the one that suggested shooting from the catwalk and we shared a laugh as he said; “Well, I didn’t know you had this fancy technology to shoot from your iPad!”.

As I shook his hand and walked out, I smiled to myself and a warmth of pride came over me.

With any type of photograph you may be attempting to capture, this is a wonderful tool to guarantee you’re getting the shot right. I’ve showed the CamRanger to many photographers and every photographer that has used it or has seen me use it in action has purchased one. I foresee it becoming one of those “essential” accessories in every photographers bag. 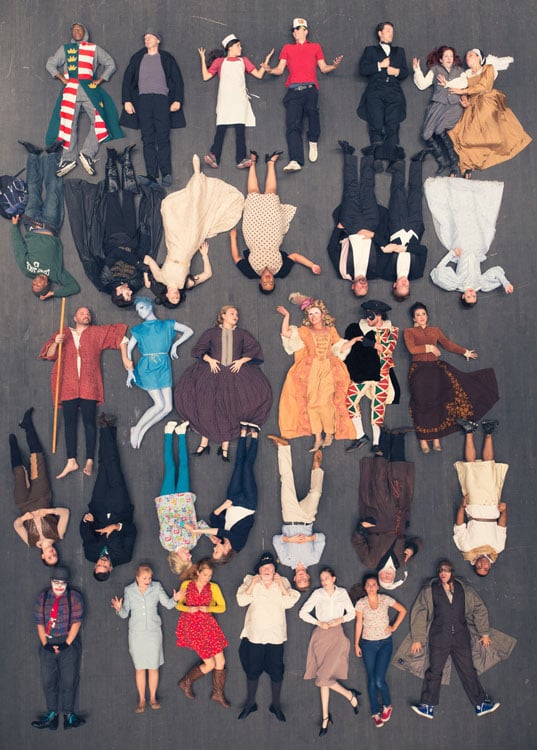 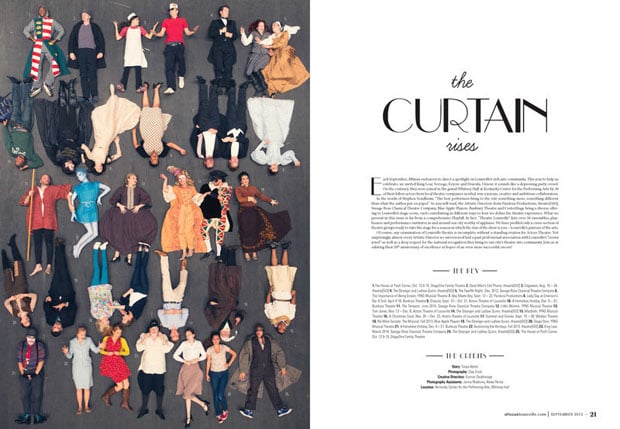 About the author: Clay Cook is a photographer based in Louisville, KY, and is the owner of Clay Cook | Photography. In addition to his website, you can see more of his work on his blog. This article originally appeared here.

Pressy: A Universal Android Button That Lets You Shoot & Share Pics in a Snap