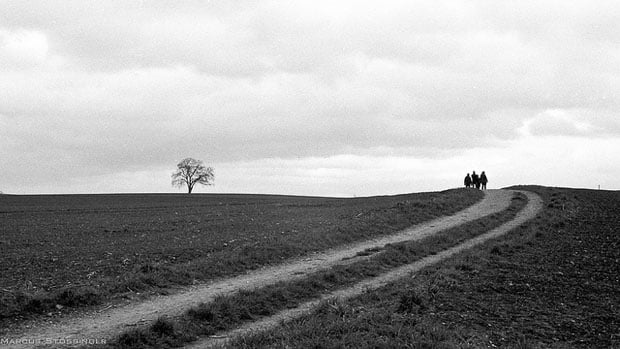 I have been shooting a lot of film lately and enjoy it tremendously, so I thought I’d share some of the experiences I’ve had in the last year or so, mainly so you can learn from the mistakes I made, avoid them and then make your own.

For the sake of getting some kind of structure into this post I’ll try and describe three typical scenarios of people shooting film today, differentiated by the amount of control you’ll have over the image.

Scenario One: Point and Shoot

This is the easiest and cheapest way to get started, and what I’d typically suggest for first time film shooters. You’ll have less control over your final image because development and scanning are done by the lab, but it’s a great way of finding out whether shooting analog might be for you. All you’ll need is any cheap camera, a C-41or E-6 process film and a lab that does your developing. Shoot the roll, send it to the lab, download your scans and voila, there are your images. Pretty straightforward, eh.

There are several methods how you can influence the resulting image, namely through choice of film:

Of course, you might not agree with the way the lab developed your films, they might have scratches and fingerprints and the scans are typically fairly low-res. But it can give you a good idea, of what shooting film is all about.

Case in point about lab scans: Check out the lovely scan lines on the bottom left: 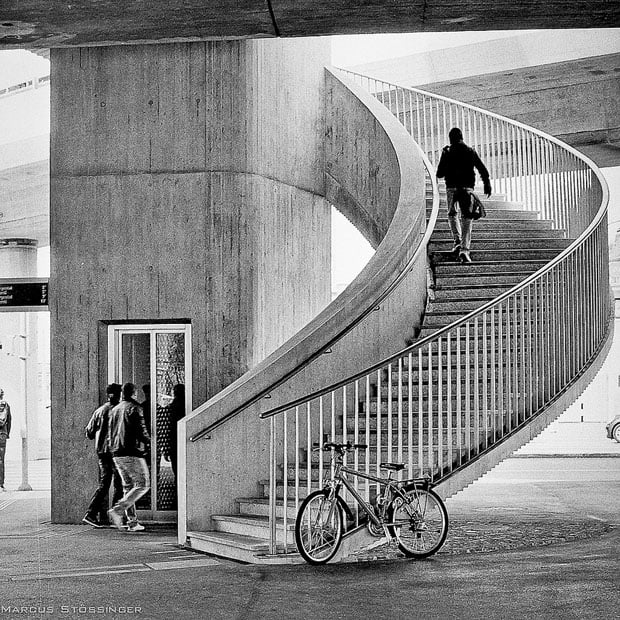 Scenario Two: Mixing It Up

By this time you probably have found out whether analog photography is for you and you might start purchasing some more serious gear. Maybe a nice little rangefinder, a 1970s pro-level SLR, a medium format camera, like a Rolleiflex TLR or perhaps even a Hasselblad 500C/M? One of the great things about shooting film is the incredible amount of toys and tools available, for a fraction of what these cameras used to cost when they were released. 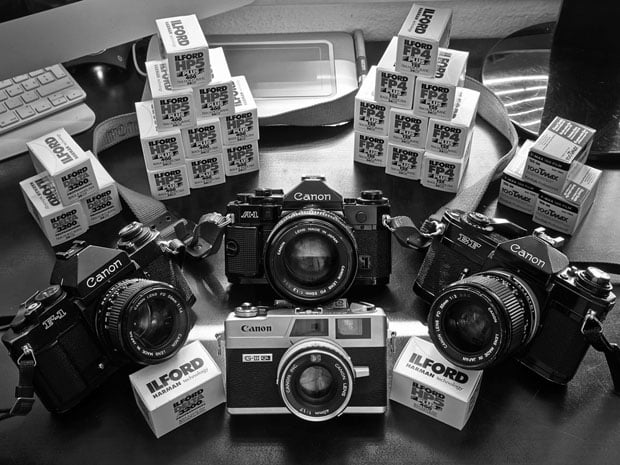 But, knowing that your gear is capable of exceptional image quality, you might want to have a little more control over the more in-depth aspects, such as contrast, grain and extended dynamic range. So typically the next step involves developing your own films (the B&W ones at least) and getting yourself a scanner.

Developing at home is indeed very straightforward, cost effective and easy. You won’t need a darkroom or any expensive equipment, all you’ll need is a changing bag, a development tank and some film clips to hang your film to dry, all of which is available new or can be found used for very little money.

I’d suggest choosing one or two films which you can develop with the same developer and stick to them until you get consistent results. The chemistry can be ordered online and as for the “recipes” for developing your film, I’ll leave these two links as well as a short video by Ted Forbes detailing how this is done typically.

Now about the scanner, if you only shoot 135 film, a dedicated 135 film scanner will most certainly give you the best results. If you are more of a medium or large format shooter, a flatbed scanner with a transparency unit will be more versatile, but lacking in resolution.

Another cost effective option might be to scan your film using your DSLR, as described in this post on PetaPixel. But since this is the part of the process I enjoy least and there are plenty of rather animate discussions about flatbeds vs. film scanners, I’ll just leave these links as an introduction to the boring and tedious world of scanning.

If you read the last paragraph, you might have gotten the idea that I don’t particularly enjoy the hybrid workflow… and you’d be correct. In my opinion, the one thing that completely elevates the all analog workflow over the hybrid or digital one is the craft of making wet prints. There is something magical about standing in the dim red light of the darkroom, drinking beer or coffee (mandatory), smoking cigarettes (not quite as mandatory), listening to music and gradually seeing the image appear on your paper.

Ted Forbes made quite a nice series about darkroom printing, and what actually goes on in the process, so I’ll just leave you with this video instead of trying to explain it in words.

A lot of the film shooters I know are a bit intimidated by the idea of wet printing, but I would argue that there’s never been a better time to get to know that aspect of photography. All the gear you’ll need is available for a pittance and with a little knowledge about the techniques it’s surprisingly easy to get very good results quite soon.

A basic setup for enlarging consists of the enlarger itself, an enlarging lens, the timer with which you control the exposure, a focusing aid, an easel on which the paper is placed and four plastic trays. You will also need a safe light, some small tools like tongs, cotton gloves and maybe an antistatic brush. Depending on the quality and availability, this should start at anywhere between free and $150, I personally was lucky enough to get a pro-level setup for CHF 300 which would have cost about CHF 4000 new.

Also, check out Ted Forbes’ videos on the minimalist darkroom, loads information about what you need can be found there.

The only thing that’s a definite drawback, in my opinion at least, is the need for a darkroom. The paper used to print on is sensitive to certain wavelengths of light, so you will need to find a room, preferably with access to running water and ventilation, which you can darken completely.

Since I live in Switzerland and the prevalent theory in bathroom design appears to be that you should always be able to reach the towel from any part of the bathroom (read, they are all tiny), I have to convert my kitchen into a makeshift darkroom with velcroed black pond liner to cover the windows and a towel underneath the door.

I agree that there is quite a lot of effort involved in getting to the final print, should you decide to try an all analog workflow. But to me there is something special about holding a 30*40 cm print on baryta fiber paper in my hands, knowing that this was something I crafted from light, silver and rather smelly chemistry.

I understand that this is a very incomplete post. I haven’t even touched on the different types paper or chemistry that’s available, neither did I talk about what kind of shooting experience the myriads of different camera types and film formats can provide.

From my post, you won’t be able to tell why anyone in their right mind would choose the comparatively slow and cumbersome process of shooting film over the undeniable convenience and technical superiority of shooting digital. But I do at least hope that I piqued the interest of some of you to go out and maybe try shooting a roll or two, mainly because I believe that anyone can benefit from the experience and take away a few things, which might ultimately make them a better photographer.

I’ll end this post with a final link to a website which did help me tremendously to find my way around shooting film. Every question that has ever been asked regarding film photography, you will find an answer to on apug.org! And if you should have any more specific questions about film photography I’d be very happy to try and answer them in the comments.

About the author: Marcus Stössinger is a photography enthusiast based in Zurich, Switzerland. You can find his work on his Flickr Photostream. This article originally appeared here.

Laundry Around the World Photographed From Below