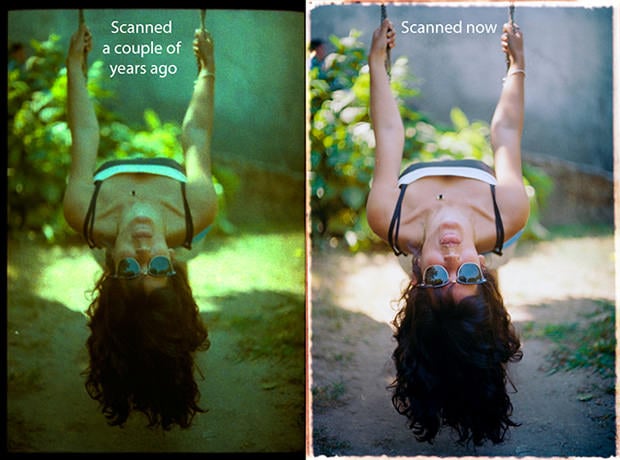 Well, lets just say I’ve gotten better at this over the last couple of years. The left image was one of the first I’ve “scanned” with my DSLR, and the one on the right I’ve just rescanned using the techniques described below (higher resolution available here). Right now I can get higher resolution and better image quality that what street labs give you on CD.


I’ve seen many articles on the web explaining the basics of digitising film negatives or transparencies with a digital camera. The basics are quite simple: you take a photo of a negative into a light source and invert. That’s it. But that alone led me to scan negatives that looked like the one on the left, above. Because I’ve never seen one tutorial that told me “the whole story” of how to do it properly, I’ve decided to put together what I’ve learnt during the last two or three of years of scanning film with my DSLR.

First of all: Why?

These are my reasons, you may obviously have different ones. Some people do this because it’s faster than using a scanner, but that depends on how much time you spend post-processing, and I do spend a bit more than I would like to admit, but it is a time spent doing something that gives me pleasure, not pressing buttons on a poorly designed software and waiting for a tedious scan.

All the following instructions have the objective of achieving the best possible resolution, colour depth and dynamic range out of the film, while keeping image noise as low as possible. Also, I aimed at keeping the whole process as quick as possible. I think each time I’ve made a scan I’ve got better results than the time before, because I keep improving the process and now I’ve got to a stage I’m quite happy with the results.

What You Will Need

Setting Up the Hardware

The basic idea is pretty simple, you need a diffused, homogeneous light source, a way to hold your film, and a digital camera focused on the film. Because you’ll be focusing at a very close distance, the depth of field will be very narrow, so focusing precisely and keeping the distance between the film and the camera exactly the same throughout the scanning. In order to achieve this, several people developed different techniques, such as using a shoe box, simply a tripod and a glass table, or even a tube made from toilet paper rolls. I have tried variations of these in the past and ended up developing my own film holder using laser cutted mdf (schematics for hand or laser cutting can be found on thingiverse, with instruction of how to build it). I’ve designed this because it allows me to setup and scan a whole roll very very quickly, with very high precision! The instructions below are broadly independently of which type of film holder you are using. 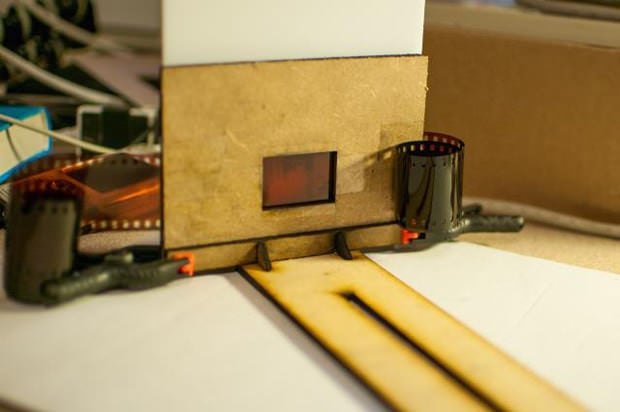 Setting Up the Camera and Flash

What you need is to pick the sharpest lens you’ve got, and make it focus close enough so that the picture in the film, fills up the camera sensor as much as possible. The combination of equipment that works best for me is a 35mm 1.8G Nikon lens with a small 20mm macro extension tube. You can find very cheap extension tubes on ebay for whichever camera brand/lens mount you’ve got. I’m using a tube with auto-focus controls to let me use the focusing motor on the lens, which saves me some time and some headaches when finding out all the film I’ve scanned is just so slightly blurry (which did happened to me once or twice).

After making sure that the camera is focusing precisely on the film, you must keep everything stable enough not to bump into some of the parts during scanning. This is one of the main reasons I’ve designed the scanning tool: to make sure the distance between the camera and the film stays precisely the same. Having focused the lens, you will want to configure a couple of things in the camera:

I usually place the flash at about 30cm away from the film and make it shoot through a cardboard box so that the light doesn’t splash all over the room and cause unwanted reflections on the film. I have also cut a small hole in the cardboard box and place a lamp above it to have some light shine through the negative and make my life easier when focusing. 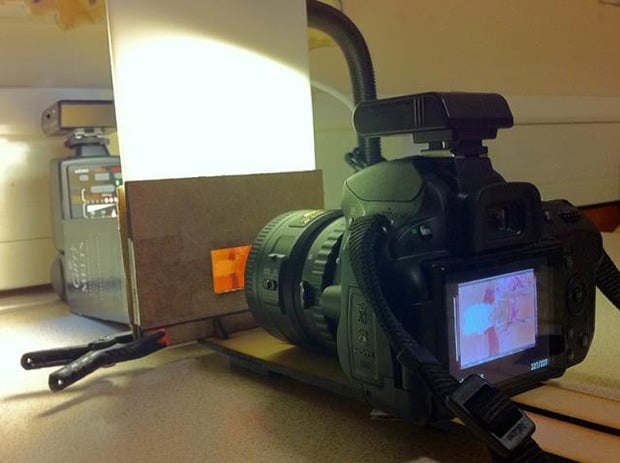 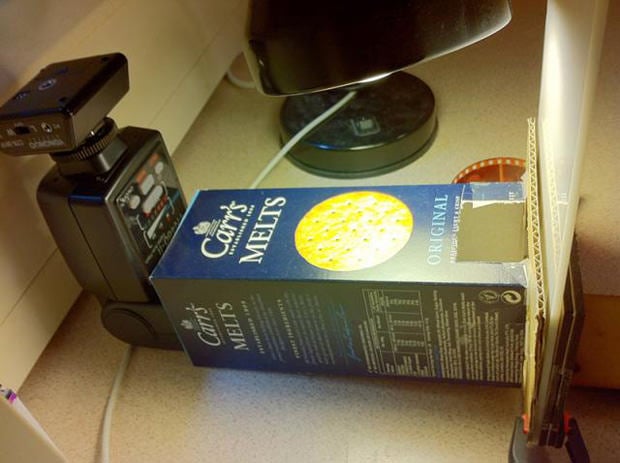 This process is pretty much straightforward, once you’ve set up everything correctly, you just shoot, slide the film to the next frame and shoot again. Just make sure you have put the film in the right way and not inverted, as it will make your life easier later on.

One thing I usually do is to try to “expose to the right” which means to make the picture as bright as possible without blowing out the highlights (make them completely white, thus loosing image data/detail/texture). The way I do it is to set my camera to show the pictures on “Highlights” mode, which makes it obvious when I’m making a mistake. You may also use the Histogram for that. So what I do is to keep the flash at its highest strength as long as it doesn’t blow out the highlights and when it does, lower it by a stop or two, and then raise it again for the next picture.

You should end up with something that looks like this: 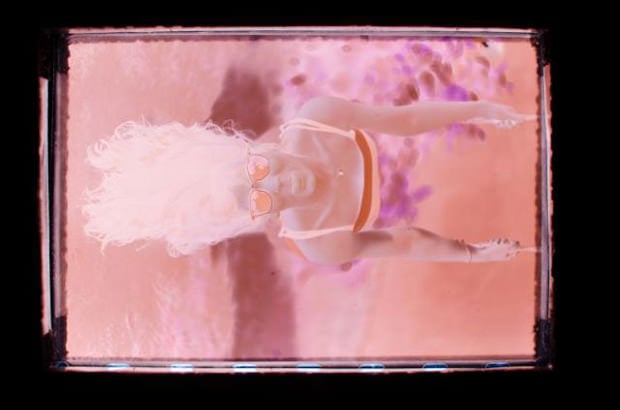 You may use any RAW development tool such as Lightroom, Aperture, Camera RAW or Capture One. I usually use Adobe Camera RAW (the RAW development tool that pops-up when you open RAW files on Photoshop) and occasionally Capture One when I just can’t reach the desired colour in Camera RAW, such as with underwater shots (Capture One has wider envelopes for white balance values, for some reason). The screenshots were taken from Adobe Camera RAW but you can do pretty much everything I explain here with any other package.

The first two steps affect all the images in the same way, so we start by selecting all images. We can now crop out the black borders. I like to leave the rough border to act as a frame but that’s obviously optional. 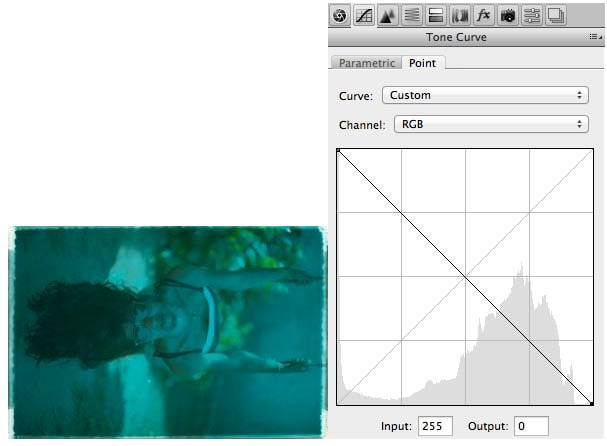 You can now select a single image at a time and as a starting point, use the auto white balance tool to get a good approximation of the original colour. You should use the tool on the greyest point you can find in the photo. In the example photo, I’ve chosen to pick the white band of the dress. You may try several different points until you find one that more closely matches the correct colour. You may now use the colour temperature sliders to reach better colour settings. Just remember that because you have inverted the curves, the slides now work in the opposite way, so if you think the image is too blue, move the slider towards the temperature slider towards the blue end. The same applies to the green-pink Tint slider.

Auto White Balance gave me the following, which I had to adjust slightly, for it’s a bit too green/blue. I won’t be able to correct for all the blue excess at this stage because Lightroom trims the white balance envelopes, but we can correct that afterwards in the curves panel, as you can see on the next step. 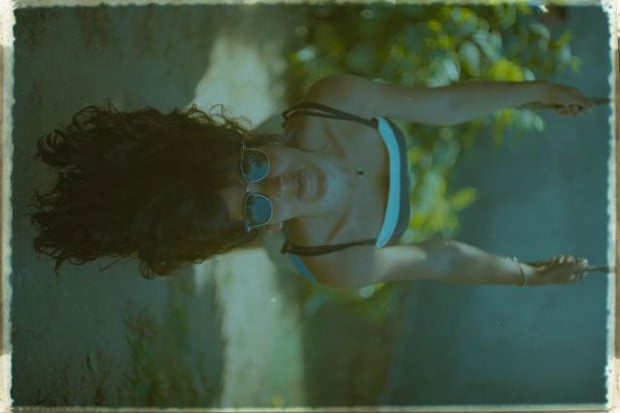 This is perhaps the most interesting and creative part of the post-processing as it lets you capture all the awesome dynamic range of film, with a great level of control over the tone, highlight and shadow curves.

Go back to the Point Tone Curve Panel now. Because we have inverted the colours, the left end of the curves represents the highlights and the left, the shadows. You can look at the histogram to check where each of these ends begins, and move the end points closer this image envelope, but not too close to the limits. This will allow us to reach a smoother curve. Keep an eye on the picture to avoid trimming highlights or shadows. 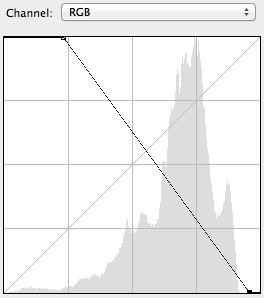 You can now increase the contrast at will by adding points in the middle, looking at how the curve affects your image. In this case I was mainly looking at the skin tones and how the parts in the shadows develop into sun lit highlights (which is one of the good things about shooting film, if this shot was taken with a digital camera, the highlights would probably either be blown out or have a bad-looking yellow tint). I usually end up with something like this: 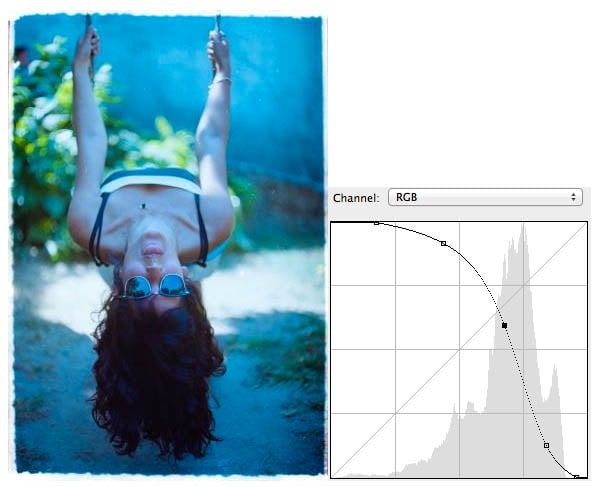 You may notice that even after moving the temperature slider all the way towards the blue end, I still get a blue tint. This can be corrected by changing the curves on the different Red, Green and Blue channels. We can do that by selecting the appropriate channel in the Point Tone Curve panel. Notice that inside the channels, the curve is not inverted, so the darker end is on the left side and the brighter, on the right. So, in this example, to achieve the image on the top, I moved the left end of the blue and green channels a bit to the right and added one or two middle points in each channels to control the middle of the curve. Do this until you’re happy with the final image. You may want to go back to the RGB curve to make some final adjustments. In the end, I got the following curves to produce the image on the top: 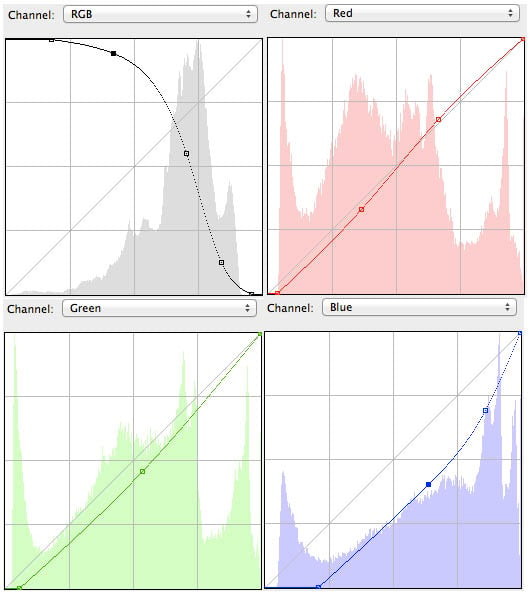 After changing the curves for the individual channels I got to this: 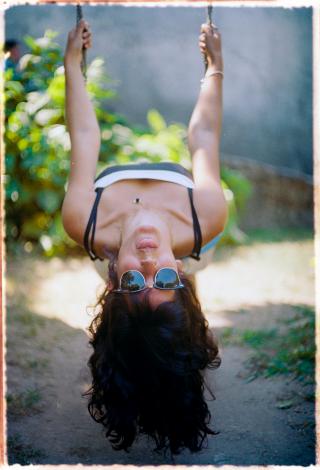 As you can see, the greenish blue tint is gone because I’ve moved both G and B curves down. After that I also noticed the image had a slight undesirable red shadow but overall it could use a warmer tone so I added one point in the lower half of the R channel and moved it below the diagonal, and another in the upper half and moved it a bit upwards. In the end I made slight adjustments to the RGB channel to accommodate the colour changes I’ve made.

This process takes some time (although you’ll get quicker with experience, and it definitely takes more time explaining than doing) and it’s probably the one where you will loose the most part of the whole process but for me, it’s also the most creative and rewarding step!

After this you may want to use the Spot Removal tool to remove blemishes, dirt or scratches and then select all the images and hit “Save Images…”. It’s also a good idea to select sRGB instead of the default Adobe RGB colour space by clicking those blue parameters on the bottom of the window. Adobe RGB (or aRGB) was supposed to cover a broader colour space but due to poor implementations, it brings some problems when printing or showing the image on the web.

Have fun and tell me about your results or any doubt you may have related to this process!

About the author: Paulo Ricca is a photography enthusiast and computer science PhD candidate based in London. You can visit his blog here and his Flickr photostream here. This post was originally published here.