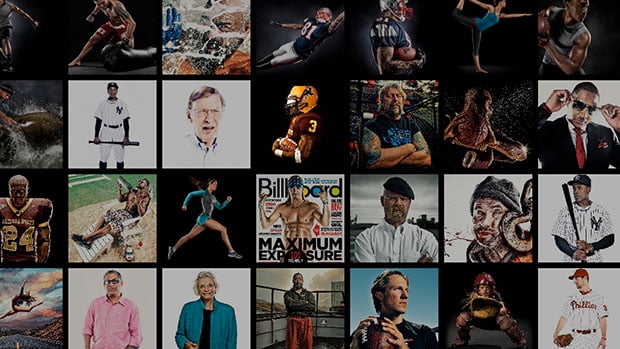 Being so close to the release of the 2013 Arizona State University Football campaign, I wanted to take an opportunity on to talk about an image that I created many years ago while still a student at ASU. When many people ask me where I believe I crossed the line from hobbyist to professional, I tell them of this campaign, and actually place the beginning on a single image. The fact that the image still lives on my website is a testament to how much I enjoy it and how much it means to me. It is the photo that opened many doors in my career, yet very few people know the background behind its creation.

It is my image of Rudy Burgess. 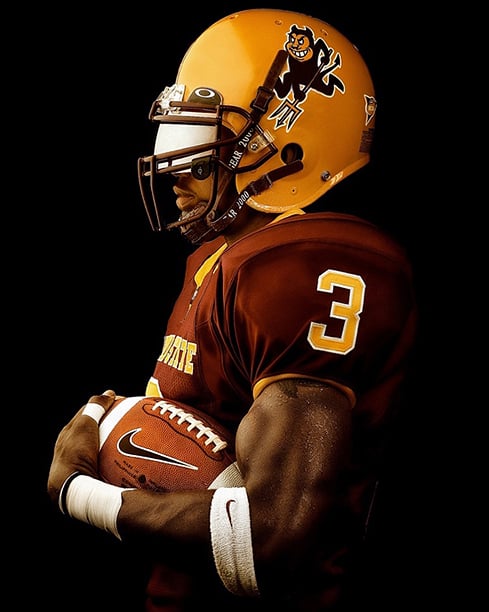 The shoot was the most intimidating thing I had done in my life up to that point. It was the first time that I was able to actually answer the question, “could I do that?” The question exists as more than just a statement in its own right — it exists as a judgement of experience and often a boasting of knowledge by the unknowing.

When I was being taught by my mentor, I would often look at photo magazines, reference photos from the pros, and tell him, “I could have done that” and “If they would have hired me to shoot that, I could have done it better and cheaper.” I was eighteen, and had no idea what it took to play at the level that I critiqued. My mentor Bartone would tell me time and again, “You have to respect the image they captured, because you do not know the circumstances under which they captured it.”

What he meant is that the viewer has no idea of the environment that a given photographer was presented in which to create. Did they have a subject that showed up and didn’t want to be photographed? Did the power grid at the studio fail and they had to shoot an unplanned natural light set? Did they spend the week prior pulling favors and making compromises for the shot in order to get it done with the budget that had been set forth?

What I have found is that once a photographer has been in this profession long enough to have experienced true stress on set and what a 40 day shooting schedule can do to a mental state, they not longer ask the question.

Back to the image of Rudy (I promise this will tie in to the rest of this article).

I can say that it was a simple two light setup, and I will have people tell me how it could have been improved all day long. But what goes unseen is the rest of the story. 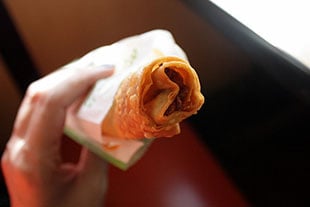 The photoshoot was my first big one, therefore I didn’t have the disposable income going into it to buy at will the equipment needed.

Three weeks prior to the shoot I started cutting my meals down to a bean burrito and cheese from a Mexican food place that I could walk to from my apartment. The meal only ran me $4.21 and the savings from it, combined with selling off a lens that I loved (but wouldn’t be using on this shoot), allowed me to buy the softbox and umbrella I needed for the shot.

My wife (who was my girlfriend at the time) and I stayed in on the weekends and watched TV and I didn’t even own a car… because I used the money to buy a camera instead.

When the day of the shoot arrived, I had a shot list of what I needed for the client, but not much time to shoot on my own otherwise. Yes, the images looked great, but the one that I had purchased the softbox for wasn’t in the shotlist, so all that was left was hope.

After the last player was photographed and the shoot was essentially wrapped, one player stayed around, and was interested in how photography works. It was Rudy Burgess. He asked if I could teach him about lighting and I immediately started setting up the softbox I had purchased (there were no assistants, because I couldn’t afford one).

Slowly, the light started to dial in and because the pressure to deliver was behind me, the shot began to show itself. I had drawn out the lighting setup on napkins and notebooks for weeks and seeing it in reality was a very surreal moment. I remember looking at the back of the camera in disbelief that the image I saw in the LCD was mine.

What resulted from them was this image — the image that started my career.

About the author: Blair Bunting is a commercial photographer based in Phoenix, Arizona. Visit his website here and his blog here. This article originally appeared here.