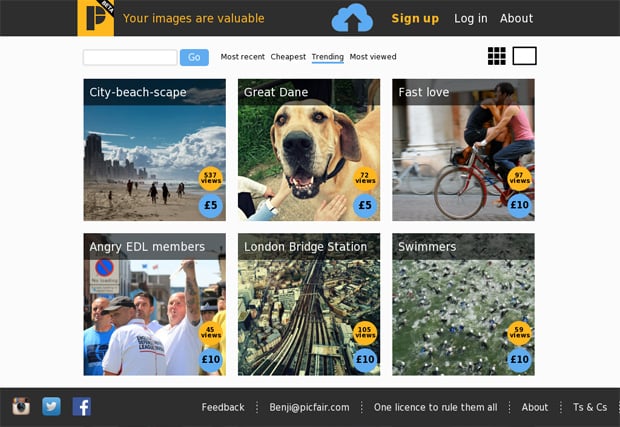 There’s something to say about the curious nature of journalists. Some spend all of their hours researching a particular subject, others go out into the field to experience first-hand, and some others quit their job and take up coding classes.

It’s true. Just ask Benji Lanyado. This once full-time Guardian writer and contributor to other publications decided to quite literally quit his day job to pursue building what he thinks is the next big thing in stock photo buying and selling.

It’s called Picfair, and it’s self-regarded as an “open-to-all image market.” I was curious to know what that meant, exactly.

“It’s available to professionals as it is to non-professionals, or just anyone who has a good shot,” Lanyado told me.

The service is designed to be efficient. Incredibly efficient, in fact.

The price of an image on Picfair is entirely at the discretion of the photographer who uploaded it. If he or she decides to sell their image for $10 (the website accepts payments globally, but displays prices in GBP for now), they receive $10. The fee — 10% of the cost of the image — is paid by the buyer.

Picfair’s magical hat really comes on when we’re on the topic of images licensing. It’s designed to be simple. Some stock photo websites have tons of ways to license imagery, and that can be quite intimidating.

“If you pay for an image, as a publisher you can use it where you like, once, from the front page of a multinational magazine to an online thumbnail,” Lanyado tells me. 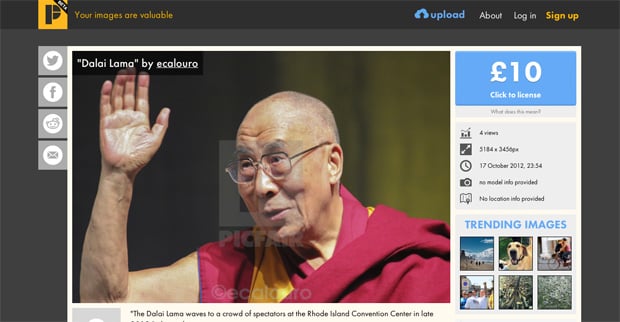 The downside is that the website’s catalog of imagery is rather small at the moment, but in conversation, Lanyado mentioned about 600 pictures had been uploaded over the course of one night. Not bad for a service that’s only been available publicly for a week.

In uploading one of my images, I found the process to be rather quick. Upload, fill in some image information, and you’re on your way. The next step is to wait and see if anyone will find it worth buying.

As time progresses the coming of more features and enhanced editing is inevitable, so this could be an exciting difference in the stock photo selling industry. Frankly, we’re quite interesting in seeing how well Picfair manages to do now that it’s open for business.

So, if Picfair sounds like it’s up your street, you can check them out here.