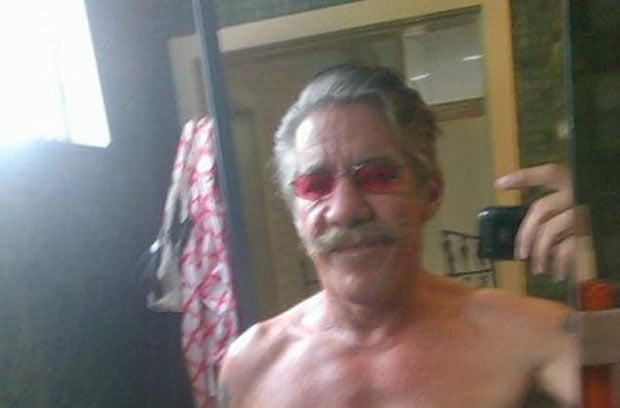 From: Cheri Frost speaking on behalf of Everyone

We need to have a little “sit down,” you and I. Don’t be nervous. I see you fiddling with your mustache, but I assure you this will take no time and you’ll be glad when it’s all over.

Let’s start with the Internet. The Internet is an exciting place, isn’t it? So much to do, to read, to write, to plagiarize. Oh, wait, we’ve gone over plagiarism already, right? Good, because that’s not what this sit-down is all about…

It’s about your half-nude bathroom selfie.

First of all, I never thought I’d ever see the words “Geraldo Rivera” and “half-naked bathroom selfie” in the same sentence. At least, I prayed I never would. But, just like my prayers for calorie-free Nutella and a studio shaped like the starship Enterprise, God has said, “no.” So, let’s address your half-naked selfie.

Now, I wasn’t too startled when I saw it. I read the article on People.com  and the words “blaming tequila” jumped out at me. Naturally, my first thought was, oh, that crazy Geraldo is drunk again, and I gave you a pass. I mean, I understand the mind altering effects of alcohol. Those among us who have not done some bonehead thing whilst under the influence, throw the first stone. And those of you throwing the stones are liars.

I, myself, am about as far away from that rock pile as you can get. I once celebrated New Year’s so hard that I woke up in my dog’s bed, wearing a tiara and sucking on a noise maker. I get it. I understand. You were out on the town, having a good time, throwing some tequila back; you got home late; you went into the bathroom, forgot you weren’t 18 years old, and you took a half-nude selfie which you then posted to Twitter.

But, then, Geraldo, and this is the disturbing part, I read that you were’t intoxicated at all when you took the photo. According to an interview you gave with New York’s 95.5 PLJ Radio on Monday you’d taken the photo earlier in the day, which means this photo was not even created by tequila; it was created by a sober Geraldo, which leads me to the next question…why?

This is where the sit down needs to come in.

See, Geraldo, for many, the bathroom is a sacred place; it is a refuge-a place of sanctuary; and for a busy parent of small children who constantly demand attention, the bathroom is, quite often, the only room in the house in which one can hope to steal a few precious moments alone. I assure you, with small children, it is the ONLY place you’ll get to play Candy Crush.

And it is also one of the only places in the house with a large mirror, which is why it’s so popular with the Selfie Crowd. You know, teenage girls all huddled around a single teenage girl with a camera. It’s fun and silly and cute.

But, Geraldo, the half-nude 70 year-old selfie passed “cute” a long time ago. Don’t get me wrong, I love that you love your body. I mean, it’s clear you love your body a lot. But no one wants to see this. No one. And having seen it, it can not be UNSEEN. Apparently, Fox News felt the same way an insisted you take it down, which you did, with a Tweet saying, “note to self: no tweeting after 1 am.”

Now, I realize that despite my advice, you might be determined to continue pursuing the half-naked selfie path. After all, you’re an esteemed journalist who once thought he found Al Capon’s secret vault and got his nose broken by skinheads on a talk show; who am I to tell YOU to stop? So, if I can’t convince you to stop the half-naked selfies, at least I can give you some photography pointers:

To begin with, you must think of your bathroom as an empty canvas onto which you will paint your half-naked selfie. You are the photographer and this is your studio, which is why the following tips are essential if you are to find success in this photographic genre.

Tip #1: The pink and white robe hanging on the post in the background is a no-no. I’m assuming it is your wife’s, but see, Geraldo, that’s the thing: We. Don’t. Know. That’s why, in future selfies, make sure the background is free from distraction. This is how stories get started. 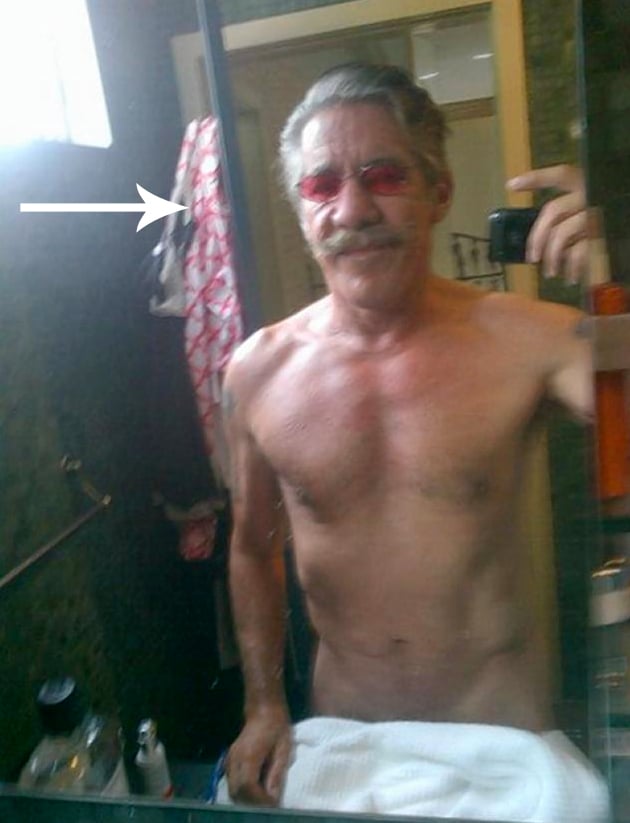 Tip #2: In a bathroom selfie, we will see everything on your bathroom counter, like that enormous, Costco-sized bottle of Listerine. Dude, it’s mammoth. It’s like Listerine for the entire neighborhood. People will wonder, like they are now, why Geraldo Rivero requires a jumbo bottle of Listerine, so it’s best just to put that away. 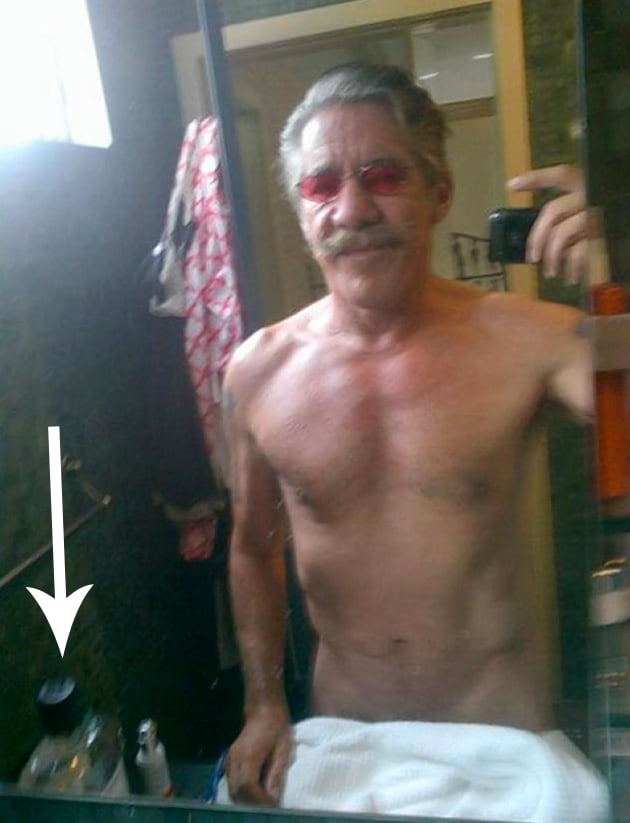 Tip #3: Geraldo, wearing sunglasses while inside a building is never a good idea, even if they do have pink lenses. (Personal note: I think these are darling.) But wearing them in the bathroom is an even worse idea, unless they are prescription transition lenses, but that would mean you came in from outdoors, and before they could even adjust to indoor lighting, you bee-lined into the bathroom, got naked and took a picture. Either scenario is pretty much a lose-lose. 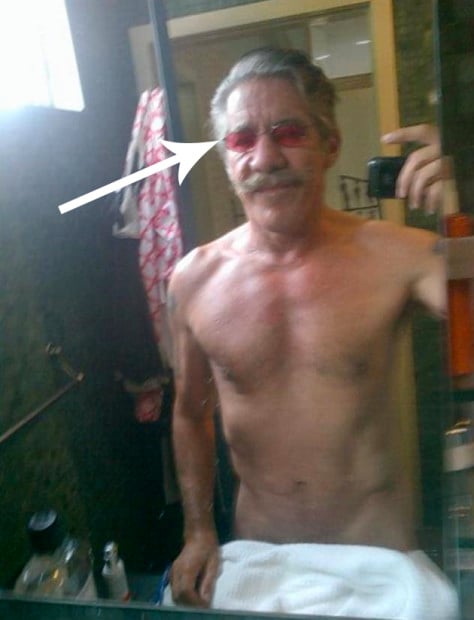 Tip #4: Light flare. This was actually a very nice, unexpected touch. A blown out bathroom window is kind of artsy, although a little more of the window would have created a nice contrast with the sunburn on your chest. Just something to keep in mind. 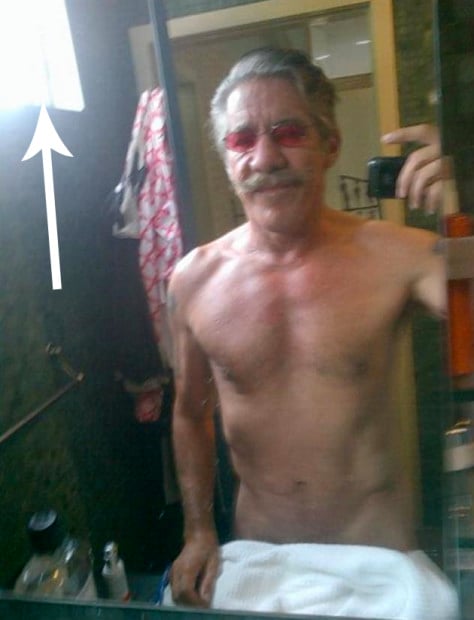 The final pointer is that of the white towel.  Its strategic placement right below the pubic bone makes it a tease towel, which is very “Magic Mike” of you. I suppose we all owe you a debt of gratitude that you didn’t use a hand towel or a washcloth to hide “your thunder.”

Did any of this help? I sure hope so. I can not impress upon you enough, Geraldo, that when the urge hits you to do another half-naked selfie, fight the urge. Remember, there are much better ways you can be using your time and journalistic experience. After all, Al Capone’s vault is still out there.