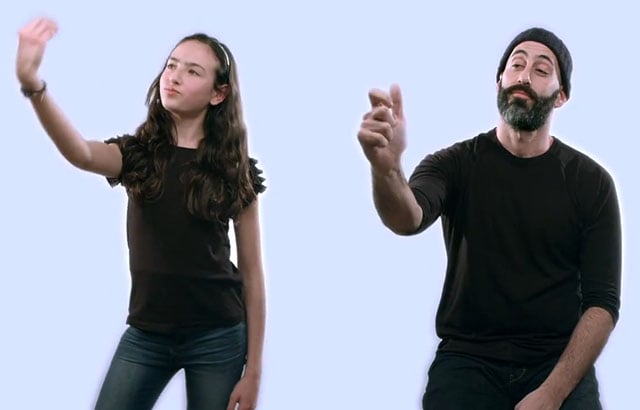 New Internet culture slang words such as “selfie,” “photobomb,” and “duckface” are being added to respected English dictionaries, so it makes sense that there should also be new signs added for them in American Sign Language. Here’s a look at what those signs are.


Hopes&Fears has published an interesting article about how the deaf community is collaboratively working on signs for new slang terms over the Internet until dominant signs emerge and become accepted and agreed upon.

The site invited Douglas Ridloff, the founder of ASL Slam, and a 12-year-old Brooklyn girl named Tully Stelzer to demonstrate some of the new signs that have emerged in recent years, a few of which are related to photography culture.

Their signs are similar, but not always the same.

SELFIE [noun] – informal. A photograph that one has taken of oneself, typically one taken with a smartphone or webcam and shared via social media: Occasional selfies are acceptable, but posting a new picture of yourself every day isn’t necessary. —Oxford Dictionary

“I thought that “selfie” was really easy,” Stelzer says.

Ridloff responds to her saying, “My sign for selfie was a little bit different than yours. I did it by pushing the button on the camera, but our concepts are almost the same. It felt easy because it’s almost like following common sense of what we do organically.”

PHOTOBOMB [verb] – Spoil a photograph of (a person or thing) by unexpectedly appearing in the camera’s field of view as the picture is taken, typically as a prank or practical joke: We were interrupted and photobombed by at least twenty tourists. —Oxford Dictionary

Ridloff says this was the most difficult word for him. “‘Photobomb’ was a bit of a challenge,” he says. “I asked others in the community how they sign it, and we had all different versions, and so we’ll see what the comments are. Some people agreed and disagreed, but this is the one I chose.”

“You could also change it depending on whose POV you are presenting: am I taking the picture or am I the one in the picture doing the ‘photobomb?’ So it brought about quite a hot discussion about which way to sign ‘photobomb.'”

DUCK FACE [noun] – an exaggerated pouting expression in which the lips are thrust outwards, typically made by a person posing for a photograph: The pop star pursed her lips into a duck face in one shot. —Oxford Dictionary

(via Hopes&Fears via Laughing Squid)