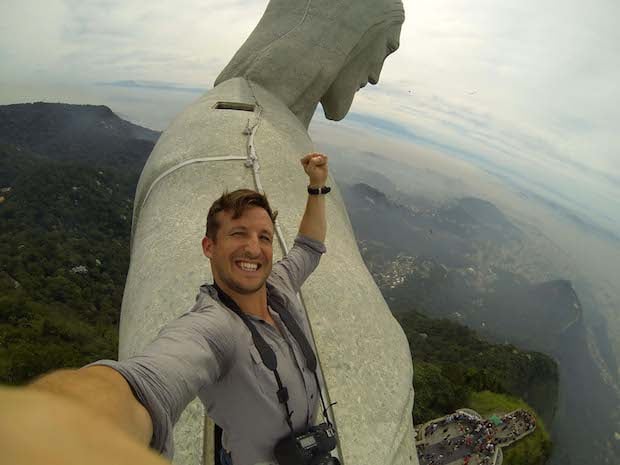 If you’re going to take a selfie — and we won’t judge you if you do… even though others certainly will — you should probably follow photographer Lee Thompson’s lead and do it in an awesome way.

Thompson’s recent selfies, which happen to be going viral, aren’t duckface selfies that show off his new outfit, or mirror selfies that show waaaay too much skin (I’m looking at you Geraldo Rivera). No, Thompson’s viral selfies were captured at the top of the Christ the Redeemer statue in Rio de Janeiro, Brazil.

The opportunity to capture these awesome photographs came up while Thompson was in Brazil photographing the preparations for this year’s World Cup. Knowing that the statue had been under repairs ever since it was struck by lightning earlier this year, he and his colleague, Oliver Harvey, took a shot in the dark and asked the Brazilian tourist board for permission to climb to the top.

Then the unthinkable happened… the tourist board said yes. 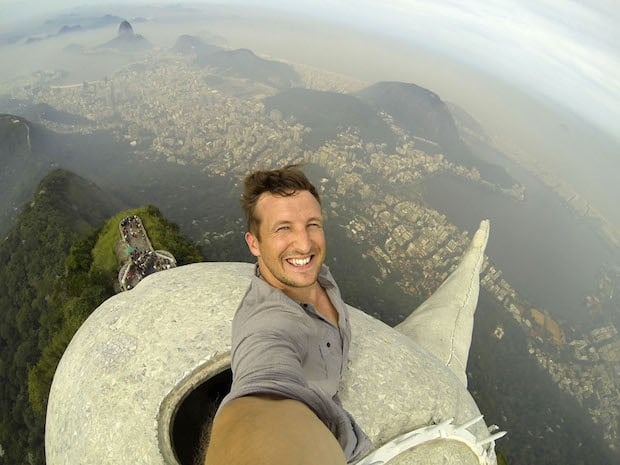 And so, one fateful day in May, he found himself climbing up the scaffolding at the base of the 98-foot tall statue on his way to the very top (with some help from a couple of high-wire workmen, of course).

Thompson describes the climb in detail in a blog post on The Flash Pack website, but the TL;DR version of the twenty-some minute climb included entering though scaffolding on the feet, crawling up 12 flights of rickety stairs in “pressing heat and pitch darkness,” and then pulling himself along the soapstone from the shoulder into the head of the statue, where he finally got to open the hatch and emerge at the very top.

What greeted him at the top was awe. “I’ve never been afraid of heights or tight spaces,” he writes. “But experiencing acrophobia, claustrophobia and profound awe at the same time was something truly remarkable.”

Thankfully he and Harvey were armed with GoPro cameras, and so you can experience some of the climb for yourself:

The resulting images, if you read Thompson’s account of the journey, don’t really do justice to the profound experience, but that didn’t stop Thompson from having a sense of humor about it:

“As far as selfies go, I can’t compete with popes, presidents, and radical Russians, because as a photographer my job is to take the shots, not star in them,” says Thompson. “But when the opportunity arose to take the world’s first (and so far only) selfie with Jesus, I couldn’t resist.”

Check out any of the links above to read the full account, definitely watch the video to experience it for yourself, and if you’d like to see more from Thompson, head over to his website or check out The Flash Pack website, where you can actually sign up to learn from Thompson in the streets of Istambul.

Image credits: Photographs by Lee Thompson and used with permission

How Joe McNally, Jeremy Cowart and Ami Vitale are Making the Next 6 Months Count