Never underestimate the power of 212 Instagrammers. Now that might seem like a strange thing to say, but vehicle manufacturer Lexus quite literally put over 200 mobile-phone-toting-picture-takers on a lot with a 1,400-foot track and let them go to town on the 2014 Lexus IS F SPORT — a vehicle we all would probably like to see sitting outside our front doors.

This project, dubbed the ‘Lexus Instafilm,’ is essentially the stop-motion video version of what you’d normally ignore on those 2-minute intervals between your shows on television, better known as commercials. 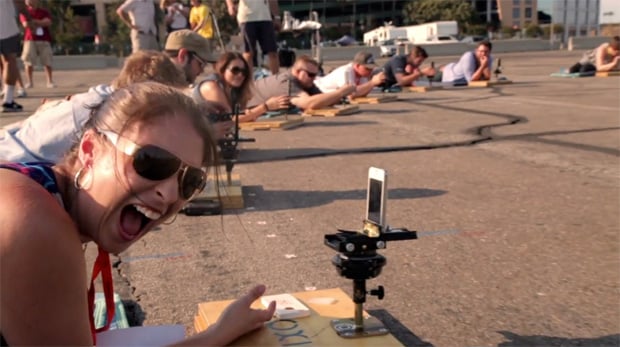 The way this went down is rather straightforward. Each Instagrammer is assigned a frame number, and with the guidance of the project’s director, they snap a photo of the car. That photo then gets the Instagram filter treatment (at the discretion of the person who snapped it), and gets posted to Instagram with the #LexusInstafilm hashtag, as one would imagine.

In the end, you’ve got a sequence of Instagram photos that get assembled in Adobe Premiere and voila, the Lexus Instafilm!

Let’s be honest: it’s a pretty big marketing stunt, but it goes to illustrate just how creative one can be with Instagram. Of course, Lexus isn’t the first to do a stop-motion project using Instagram, but maybe next time they can look into using Instagram Video instead.

Amazing Close-Up Photo of a Waterspout Rising Into the Clouds