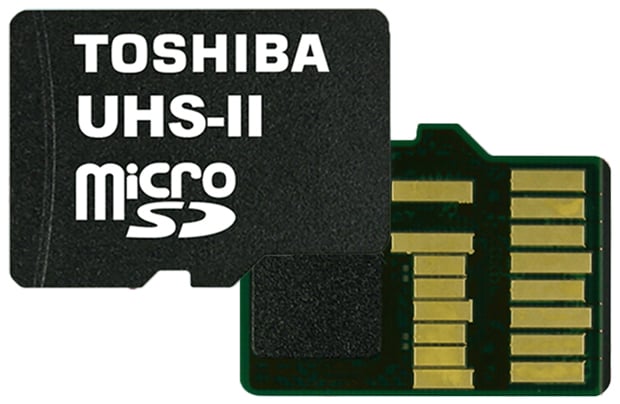 As cameras get smaller, one of the places they can choose to save space is in the memory card department. A great case in point is the new Nikon 1 J4, which ditched standard SD cards in favor of their smaller micro counterparts.

The problem with this move is that microSD cards tend to be much slower than standard SD, but that might not be the case for too much longer thanks to Toshiba.

Announced Wednesday, Toshiba has debuted the first microSD cards to comply with the UHS-II standard. That means that these cards — which can write 8 times faster than their predecessors and read almost 3 times faster — are officially the world’s fastest microSD cards.

The cards will be available in 32 and 64GB configurations, but we know neither price nor availability just yet. For now, Toshiba is giving these to chip set vendors and gadget manufacturers so they can make sure future devices can actually take advantage of these speeds.

To find out more, head over to Toshiba’s press release by clicking here.

Pentax ‘Anti-Commercial’ Doesn’t Show the Camera Once, Is Incredibly Compelling

A Beginning Photographer’s Guide to Photographing The Northern Lights