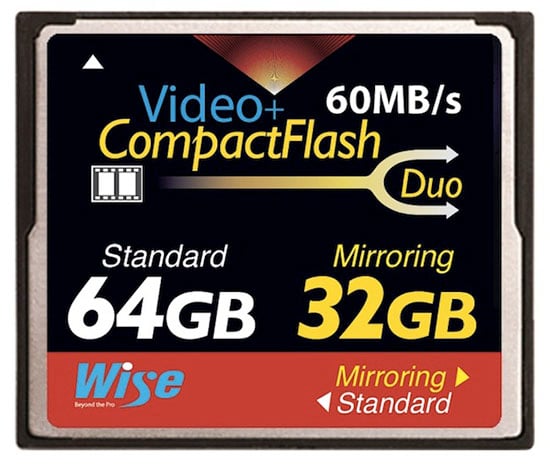 When it comes to data, redundancy is the best policy; backup, backup and backup again. This is doubly true where photos are involved, which is why professional photographers have gotten in the habit of keeping several external backups or using multiple cards for backup in DSLRs that support twin slots.

And now, Japanese company Amulet is hoping to add yet another layer of safety (and peace of mind) between you and the potential loss of your photos with its upcoming ‘Wise CF Card Duo.’

This CompactFlash card has the ability to act like a RAID (redundant array of independent disks) system if that’s how you choose to use it. RAID systems use multiple hard drives or partitions on a single hard drive to store your information in several locations, often ‘mirroring’ the same info in two or more places (depending on your configuration). The Wise CF Card Duo will act as a RAID 1 configuration; that is, it will partition the card into two 32GB disks, and store your photos in both places simultaneously. In this way, if one file goes corrupt, you still have the same file on the same card.

The advantage of instant backup doesn’t come without pitfalls, of course. In addition to cutting your storage space in half, the Wise CF Card Duo will also have to store things twice, cutting speed in half. The card, which runs at 60/50MB/sec read/write in standard mode, will run at only 30/25MB/sec in mirroring mode. Switching between the two modes is as easy as flipping a switch, but it’s worth noting you’ll have to format the card each time you alternate back and forth.

Amulet is set to release a 64GB version of the card on June 14th. No news yet on where it will be available or how much it’ll cost you.