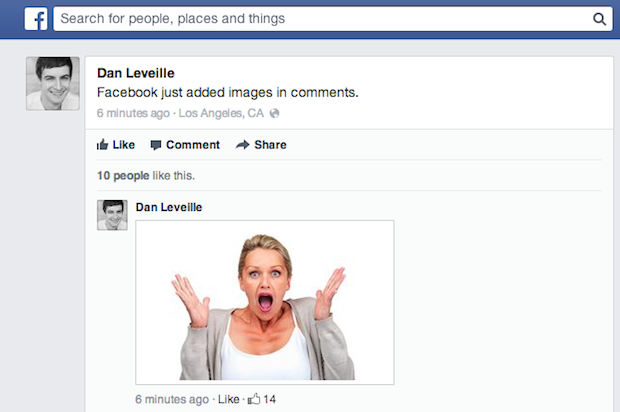 Some estimates suggest that there are somewhere in the vicinity of 208,300 photos uploaded to Facebook every day. Of those, exactly zero are uploaded as part of comment threads. Up until now, Facebook users fond of replying to their friends statuses with photos were forced to insert a link. The newest update out of the Facebook camp suggests that this will no longer be an issue.

According to The Next Web, Facebook has decided to allow its users to insert images into comments, and they’re starting to roll out the update today. The feature was integrated into Facebook’s system by Bob Baldwin, who took part in one of Facebook’s recent hackathons. Speaking about the update on his Facebook page, he explains:

When I’m talking with a friend, sometimes showing a photo helps me tell a story much better than words alone. If we’re hanging out in person, I can show a photo from my phone, but on Facebook I’d have to post a link to a photo. Now, you’ll be able to attach a photo directly when posting a comment. I hope this will make threads with friends more expressive and engaging.

It will take a some time for the feature to roll out to everyone, but once it does, you’ll see a small camera icon appear on the right side of the comment bar. For now, the feature is only available on the website itself, with integration into mobile apps arriving shortly.

Both JPEG and PNG are currently supported, with the almighty GIF still conspicuously absent. To see if the feature has made its way onto your News Feed, just log on to your Facebook account and look for the little camera icon.