Photographer Jared Polin recently had the opportunity to photograph the musician Macklemore in concert. Fortunately, instead of just shooting the three song set and moving on with his life, he brought his GoPro along to give interested photographers a taste of what it’s like taking photos from the pit at a packed out concert.

He put the above video together afterwards, adding his own commentary to give us some perspective of what exactly was going through his head as he tried to line up the perfect shot.

Like the POV street photography video we shared earlier this week by photographer Eric Kim, this video gives those interested in concert photography a great first person look at what it would actually be like. It’s the little things, like having to deal with the monitors in your way, constantly swapping lenses, and that annoying guy with his iPhone that you don’t think about until you’ve actually been there and done it. 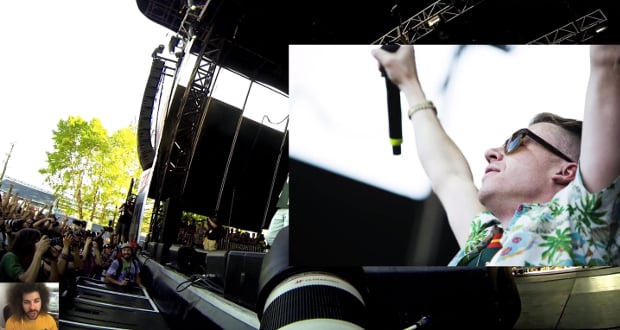 Over the course of a three song set (maybe 14 minutes in all) Polin wound up shooting 240 images, clicking away with the Canon 1D X’s super-fast burst capabilities and swapping occasionally between the 24-70mm f/2.8II and the 70-200mm f/2.8II he brought with him.

In addition to the POV video, which is very useful in and of itself, he also takes you through some of the finals in Lightroom, explaining his reasoning behind the keepers and throw-aways. It’s a great, in-depth look at the work that goes into a concert shoot, especially when you’re limited to a 3-song set.

To find out more about the experience, check out the video at the top or head over to Polin’s website Fro Knows Photo for more details.