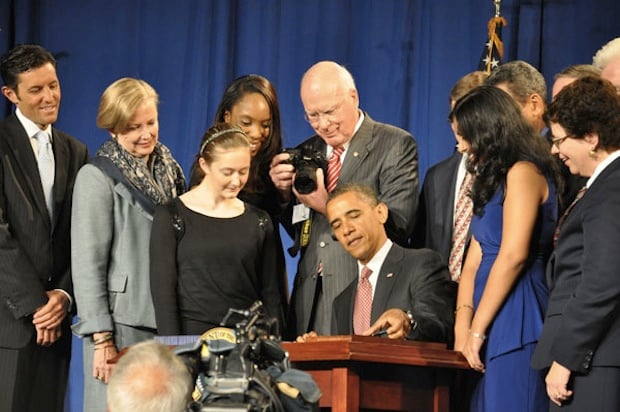 There aren’t many ways to get intimate access to the behind-the-scenes of government as a photog. Your best option is probably to try and snag a spot as the official White House photographer, but those jobs are hard to come by. A senator from Vermont, however, has found another way: get a day job as a Senator and moonlight as an amateur photographer.


According to an article in USA Today, that’s exactly what Senator Patrick Leahy has been doing for a long time now. And once you get past the irony that he is from the same state that recently proposed a bill to ban public photography, you start to appreciate the level of access the Senator enjoys, and the quality of his work.

Senator Leahy is the most senior member of Congress. Including this year’s inauguration, he has attended 10 in total, and he has the pictures to prove it. From the presidency of Jimmy Carter on up, the Vermont Democrat can be easily distinguished from his congressional peers by the SLR hanging from his neck.

Leahy’s status as the go-to amateur photographer is well-known in congressional circles. He’s photographed everything from George H.W. Bush wearing a Donald Duck cap while holding a cocktail (the former President asked him to) to VP Joe Biden and his wife in Paris (they were there for a NATO conference), but his photography is often about more than fun.

He’s been known to put his skills to use for political reasons — showing other members of the Senate pictures of the devastation in Vermont caused by Hurricane Irene, and lobbying for foreign aid for landmine victims by showing gruesome pictures of the victims themselves. There’s no indication that he’s going to get out of politics any time soon, but if he does he may have a promising photography career ahead of him as a retiree.

To see more from Senator Leahy, be sure to follow him on his Twitter account here, or visit the Senator’s campaign office webpage for more photos taken both of and by him.