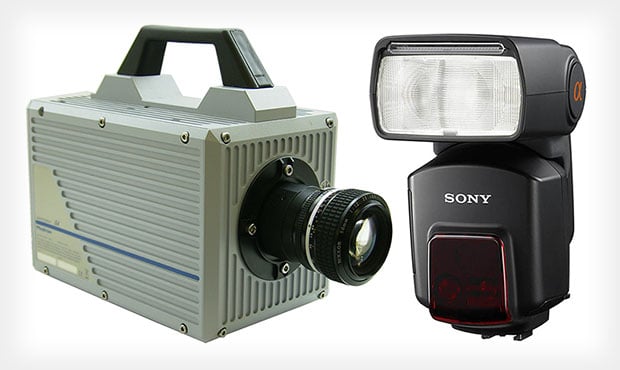 Photographer Florian Knorn recently took a Fastcam SA4 high speed camera — ordinarily used for observing things like ballistics and fluid dynamics — and pointed it at a Sony HVL-F58AM flash unit, capturing what a camera flash firing looks like when captured at 500,000 frames per second and then slowed down to to 25fps.

The resulting super-slow-motion footage captures what the flash’s flash looks like at 20,000 times slower than real time.

Here’s what the event looks like when the flash is used with high speed sync off:

It’s what you’d expect: a single, uninterrupted burst of light that’s about 1/5th of a millisecond in duration.

Today, certain modern xenon flash units have the ability to produce a longer-duration flash to permit flash synchronization at shorter shutter speeds, therefore called high-speed sync (HSS). Instead of delivering one burst of light, the units deliver several smaller bursts over a time interval as short as 1/125 of a second. This allows light to be delivered to the entire area of the film or image sensor even though the shutter is never fully open at any moment, similar to FP sync. The downside is that the flash is of less effective intensity since the individual bursts are lower powered than the normal capability of the flash unit.

Here’s what the Sony flash unit looks like in super slow mo with HSS on:

Knorn also shot this super-slow-mo video showing what a Sony Alpha A900 looks like when shooting at a shutter speed of 1/8000s. The video is 400 times slower than real time:

‘Shopped Stills From Action Movies, with Guns Replaced with Thumbs-Ups