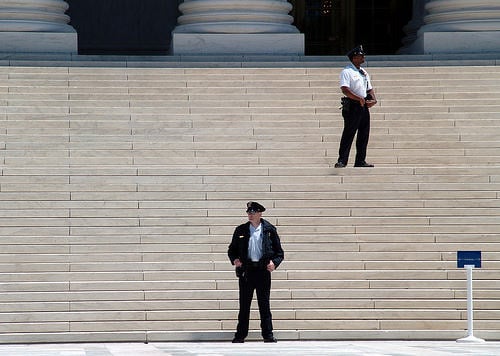 One of the reasons photographers raise a fuss when their rights are infringed upon is to create awareness in the general public and among law enforcement. A recent lawsuit between a photojournalist and the Washington DC police department has done just that. The Washington Post reports:

District police cannot interfere with citizens as they photograph or videotape officers performing their jobs in public, according to a new directive issued by Chief Cathy L. Lanier as part of settlement in a civil lawsuit.

The six-page general order, similar to one published by police in Baltimore in November, warns officers that “a bystander has the right under the First Amendment to observe and record members in the public discharge of their duties.”

[…] “It tells police to leave people alone,” Spitzer said. “It makes it clear that if a person is in a place that interferes with police operations, the officer can ask or tell them to move to another location, but they can’t tell them to stop taking pictures.”

Bad Olympic Portraits Rewarded with an Exhibition in NYC