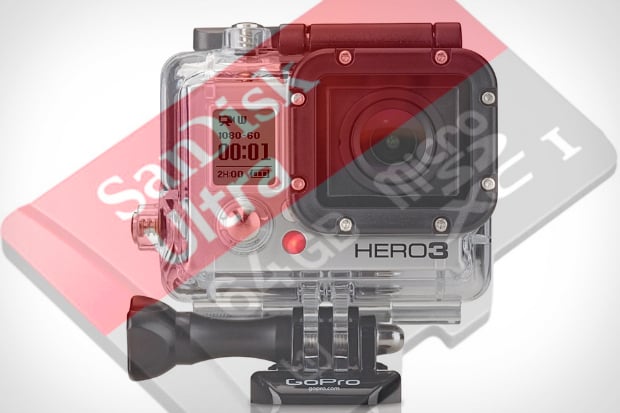 A number of users over in the GoPro forums and beyond are reporting a serious problem with the GoPro Hero3. Namely, those who have been putting up the money to buy 64GB microSD cards (the largest the Hero3 will take) are finding that the GoPro is actually frying the cards after only a few days of use.

After using their GoPro Hero3s for a couple of days (or in some cases only a couple of hours), some users report that their cards no longer show up on any of their card-readers. Once inserted back into the GoPro, the camera then gives “No SD Card” and “SD Err” messages.

The problem only seems to apply to the 64GB cards, so buying two 32GB cards is a sufficiently convenient workaround for most people; even those who have had their cards fried are finding SanDisk has been very gracious in granting free replacements. But a replacement card won’t recover the memories lost when a card burns out.

While there are data recovery services out there, you can expect to spend several hundred dollars to pull the footage off of one of these cards. So until a firmware update comes along to fix the problem, we suggest Hero3 users invest in a 32GB card and, if you want to be extra safe, switch the camera’s startup default mode to Picture Taking instead of Video, per one forum user’s suggestion.

Thanks for sending in the tip, Mario!

Socialmatic Camera to Arrive in the Real World with Polaroid Branding