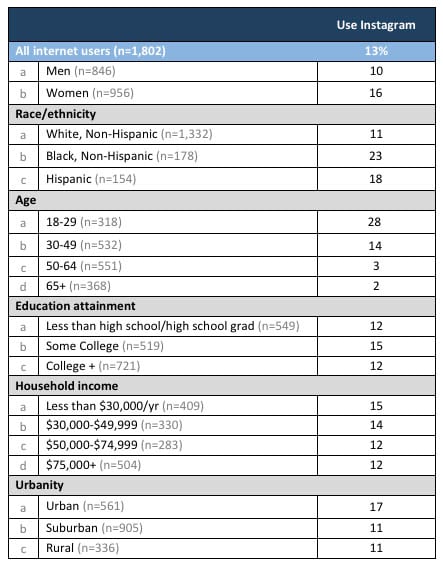 The Pew Internet & American Life Project released the results of a survey this week that sheds light on social media use among Americans. One of the networks they asked participants about was Instagram.

After surveying 1,802 Internet users in late 2012, the study found that 13% of Internet users use the mobile photo sharing service. It also found that the service is “especially appealing” to “Adults ages 18-29, African-Americans, Latinos, women, [and] urban residents.”

The chart above shows the percentage of Instagram snappers among people of various demographics.

So if we were to simply take the highest percentages from each group (which isn’t how this data should be read), we might conclude that the most common Instagram user is a young African-American woman who has done some college and is making between minimum wage and twice the minimum wage. Oh, and they live in the big city.

The Demographics of Social Media Users — 2012 [Pew Internet via Betabeat]

Portraits of a Daughter in the Style of Old Master Paintings