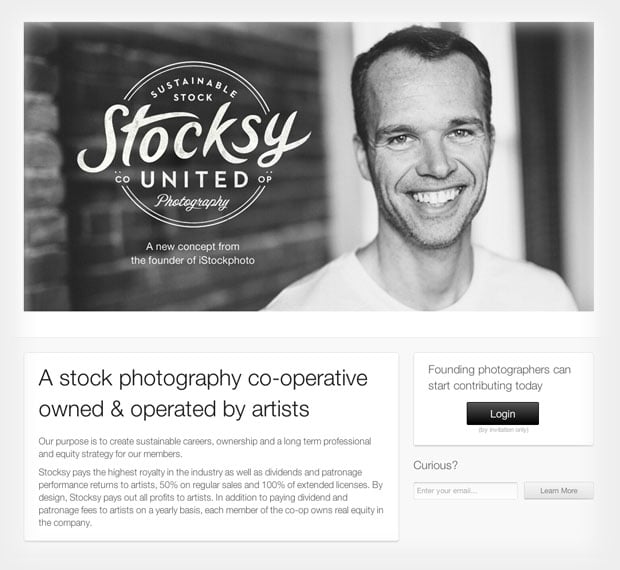 Bruce Livingstone knows his way around the stock photography industry, and he’s doing his best to shake things up. After founding iStockphoto in 2000, he turned it into a microstock juggernaut, finally selling it to Getty Images in 2006 for a whopping $50 million. Now, as both Getty Images and iStockphoto are mired in a licensing controversy, Livingstone has a new stock photo business that may rock the boat even more.

The service is currently invite-only, but some details are known from the splash page that greets you when you visit the website.

Basically, instead of serving as a giant company that distributes your photos widely while also taking a fat slice of the profits, Stocksy is a co-operative that’s owned and operated by the photographers in the community.

Its stated purpose is to “create sustainable careers, ownership and a long term professional and equity strategy for our members.”

Existing stock photography companies typically take a hefty portion of the profits from each sale — 20%-30% is a typical range for what’s actually paid out to the photographers of the photos.

Stocksy’s goal is to pay the highest royalty in the industry: 50% of regular sales and 100% of extended licenses go directly to the photographers.

By design, Stocksy pays out all profits to artists. In addition to paying dividend and patronage fees to artists on a yearly basis, each member of the co-op owns real equity in the company.

Last year we featured an article by Paul Melcher, who wrote that the ability for individual photographers to license their work directly is one of the next major trends in the photo world. Stocksky appears to be a big step in that direction.

Thanks for sending in the tip, Nathan!

The Moon and Venus Captured in a Single Photograph

Photographer Captures Detailed Photos of the Sun From His Backyard