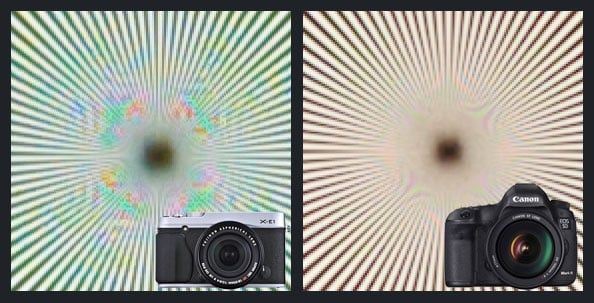 Last week, we pointed you to a piece by the New York Times on how Fujifilm is attempting to kill moiré without killing sharpness by designing its sensors in a way that eschews the traditional anti-aliasing filters used in digital cameras. Photographer Martin Doppelbauer disagrees with Fuji’s claims: he has published a piece arguing that, “digital cameras without aliasing filters are cameras with a built-in design flaw“:

To omit an alias filter in front of a digital image sensors is like building a sports car with no brakes. Of course, the car accelerates a little faster due to the lower weight and the cornering ability is also better due to the smaller unsprung weight – but ultimately it lacks an essential functional element.

For analog cameras, an alias filter is not required: ​​Film has no sharply defined limit of resolution. It loses contrast and resolution gradually with increasingly higher frequencies. You could say, the low-pass filter is already incorporated in the film itself.

So according to Doppelbauer, the recent fascination with removing anti-aliasing filters is more based in marketing rather than science.

Alias-filters: Yes or No? [Martin Doppelbauer]