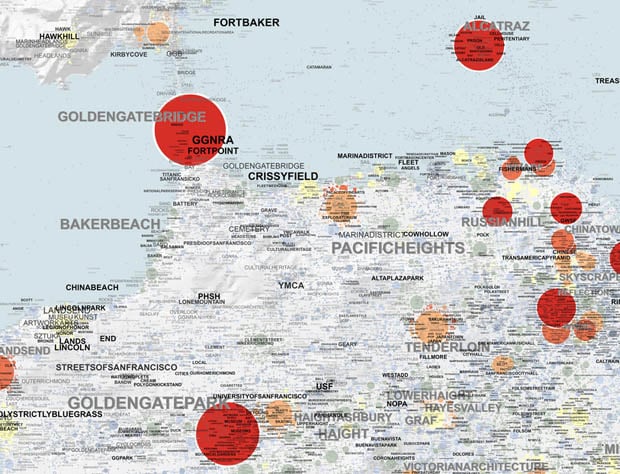 What are the most popular photo subjects in each location of your city? Is there any easy way of finding out? Those are questions UC Berkeley researcher Alexander Dunkel is trying to answer, and he has his sights set on Flickr as a possible solution. By combining the location geotags and context tags attached to many (or most) of the service’s photos, Dunkel is able to create tag cloud-style maps of any location that reveals the tags that dominate each location.


Dunkel, whose background is in landscape architecture, uses hundreds of thousands of photos across a number of years for each of the maps. The colored circles of various size indicate the number of photographs taken at those locations. The tags themselves are located at the weighted center of where they appear most frequently.

Here’s a legend you can use to interpret what the maps mean:

…and here are some of the maps Dunkel has created so far:

You can read a paper in which Dunkel presents his research here. There’s also an online interactive map for browsing (and zooming into and out of) these various maps here. For more of these maps (and to view them in higher resolution), check out Dunkel’s Flickr stream.

(via The Atlantic Cities)