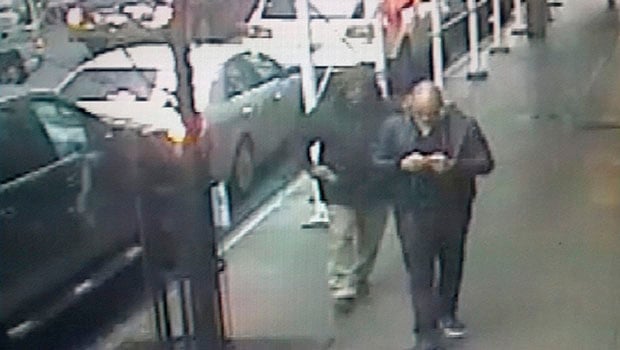 The New York Post sparked a firestorm of controversy last week after publishing a photo of a man about to be struck by a subway train. People around the world were outraged that a photographer decided to photograph what had occurred, that he had sold (or, in the photographer’s words, licensed) the photo to a newspaper, and that the paper decided to publish it with a sensationalist front page story.

The New York Times found an eerily similar story on its hands this week, but its handling of the situation — and the subsequent public reaction to the article — has been drastically different.

On Monday, a 31-year-old law student was gunned down in broad daylight on a Midtown Manhattan street. A surveillance camera captured a still photograph just moments before the crime, showing the murderer sneaking up on Woodard as he walks down the sidewalk with his eyes glued to his smartphone.

When the New York Times reported on the story Tuesday, it included the security-camera photo in an effort to help identify the gunman.

The next day, perhaps in response to reader complaints, reporter David Carr published an article titled “Another Portrait of Imminent Death, but One Worthy of Publishing,” explaining why the paper published the photo. He writes,

As with the subway photo in The New York Post, the photo published on Wednesday will provoke lots of discussion, but not for the same reasons. It is ghoulish in aspects, but there is a persistent and immediate public interest in publishing the photo, as Michele McNally, the assistant managing editor at The Times who oversees photography, explained to me.

The decision to publish the photo “was not a close call,” she said. “There is a crime being committed, there is information that could help locate the suspect, and there is other information in the photograph that when it is put out there, could be helpful in solving the crime. It was a no-brainer.” (By contrast, she said, the Post photo left her “ambivalent” and she “would have consulted with many,” adding, “I think a lot of criticism of the picture comes from the way it was displayed in the Post, the headline and caption and the ethics of lifting a camera at that moment in time.)

A commenter named Steven writes that the difference may lie in the fact that one was actively photographed, while the other was passively captured:

Let’s not forget, one image was capture by a willing participant, the Post photographer standing on the platform, the other by a ‘dumb’ camera, recording everything in its line of site. That one was capture by a conscious being, deciding, at that moment to choose to take that picture and one was a series of thousands of frames captured that day, puts us, the viewers in a very different psychological mind set.

In this view, if the published photograph had been snapped by a news photographer who knew what was about to take place, the New York Times would now be at the center of a new controversy.

Another Portrait of Imminent Death, but One Worthy of Publishing (The New York Times via The Click)

Starry Nightscape Photos of Major Cities Around the World