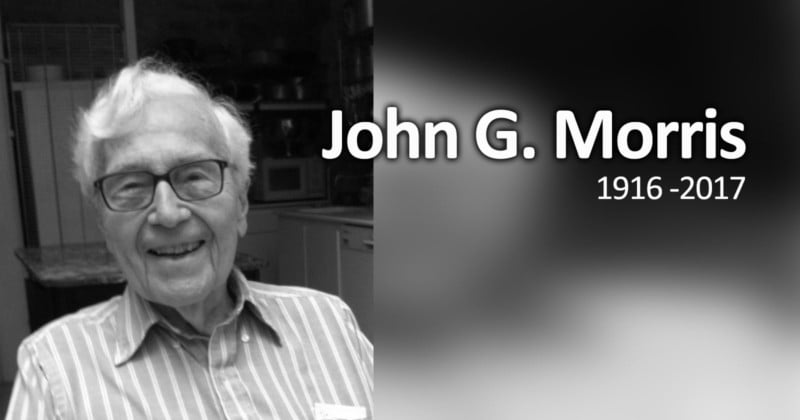 Legendary photo editor John G. Morris died today in Paris. He was 100. Morris was a titan in the world of photojournalism, serving as photo editor for LIFE, The New York Times, National Geographic, and Magnum. Photographers he worked closely with include Robert Capa and W. Eugene Smith.

Morris was born in Maple Shade, New Jersey, on December 7, 1916. As the London Picture Editor of Life magazine during World War II, Morris was responsible for editing Robert Capa’s iconic photos of the D-Day invasion — of the 4 rolls Capa sent to Morris from the front lines, three and a half of them melted due to the film dryer being set to high. Back in 2014, Morris shared the story of how only 11 of the 106 frames survived.

“Though a lifelong Quaker and pacifist — he made an exception for World War II, calling it just,” writes The New York Times. “Mr. Morris was closely associated with images of war, which he was instrumental in placing before the eyes of the world.”

After leaving Life, subsequent posts he held include Picture Editor of Ladies’ Home Journal, Executive Editor of Magnum Photos, Assistant Managing Editor at the The Washington Post, Picture Editor of The New York Times, and European correspondent of National Geographic.

At Magnum, where he was the first executive editor, Morris was instrumental in bringing American photojournalist W. Eugene Smith into the coop in 1955 after the photographer left Life on bad terms.

Smith then started a project to document the city of Pittsburgh. Although planned as a 3-week effort, the project would go on to take a full year of Smith’s efforts and result in tens of thousands of negatives.

“The project, and Smith himself, had drained much of Morris’s time without netting income for Magnum,” PDN Online writes. “He left the agency shortly after the project’s publication.”

While serving as The Times‘ photo editor, Smith fought to display graphic and powerful photos of war on the newspaper’s front page. These included Eddie Adams’ Saigon execution photo of The New York Times in 1968 and Nick Ut‘s famous “Napalm Girl” photo in 1972 — both photos would go on to win the Pulitzer Prize.

In 2009, Morris was awarded the Legion of Honour, the highest order of merit given by France. He also received a lifetime achievement award from the International Center of Photography in 2010.

Here’s what Morris had to say about what makes good photography and photojournalists in a 2006 interview with The Times:

The New York Times reports that Morris is survived by his partner, Patricia Trocmé, four sons, and four grandchildren.

Image credits: Header illustration based on photo by Photoeditorjgm

Instagram vs. Reality: How People Lie About Their Lives with Photos

How One Photographer’s Camera Bag Has Evolved Over 30 Years