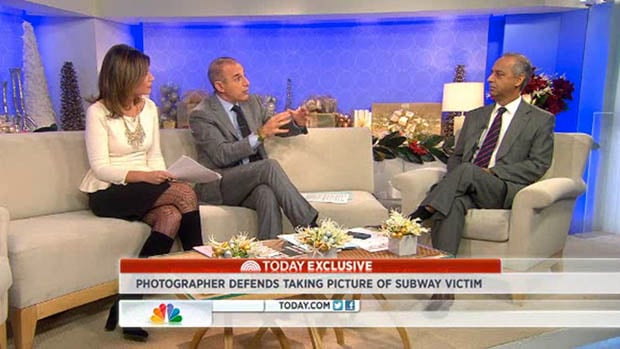 The New York Post got the whole world talking about it yesterday after publishing a morbid front page photo showing a man about to be struck by a subway train. The photographer behind the image, freelance photojournalist R. Umar Abbasi, has received criticism from people who believe he should have done more to help the victim, or, at the very least, do anything but snap photographs of what was about to happen.

Abbasi appeared on the Today Show this morning to give an exclusive nationally-broadcast interview to explain his actions and to tell the story of what happened from his perspective.

After the story broke yesterday, the Today Show ran a poll on its website, asking its readers whether Abbasi should have set his camera aside to try and help. Here’s the result of that poll: 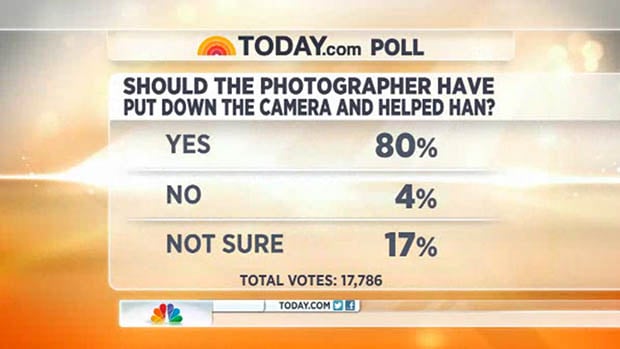 My condolences to the family, and if I could have, I would have pulled Mr. Han out. I didn’t care about the photographs. If you were to see the raw photographs, you would say, I cannot see anything in them.

He also talked briefly about being paid for the photo:

I was approached that there would be interest. I would call it licensing to use it. Selling a photograph of this nature sounds morbid. I licensed these photographs. [How the image was used] is not my decision. I don’t control what image is used and how it is used and how it is presented. That was on assignment. It’s not that I ran to The Post and said, ‘Hey guys I have a photograph you might be interested in.’

After the general public began criticizing Abbasi, the New York Post published a piece by Abbasi with the title, “Anguished fotog: Critics are unfair to condemn me“:

I have to say I was surprised at the anger over the pictures, of the people who are saying: Why didn’t he put the camera down and pull him out?

But I can’t let the armchair critics bother me. They were not there. They have no idea how very quickly it happened.

They do not know what they would have done.

A number of Pulitzer Prize-winning photojournalists have also weighed in with their own thoughts on the matter.

Earlier today, it was announced that the suspected murderer had been taken into custody. You can follow the ongoing worldwide coverage of this story here.

(via Today via PopPhoto)

Portraits of Projectionists: Photos of the People Who Play Movies at Theaters