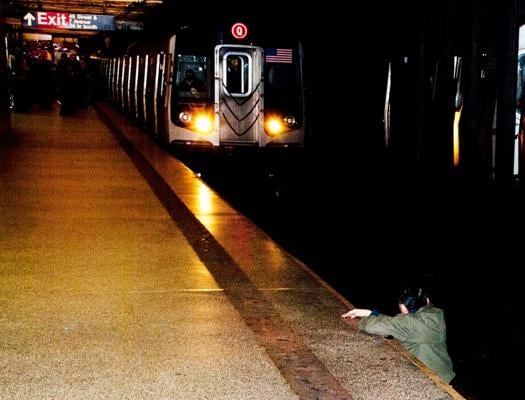 If you happen to catch a glance of the New York Post’s cover today, the above photo is what you’ll see. It’s an attention grabbing image, showing a man who is moments away from being struck and killed by an oncoming subway train in New York City. It’s also a controversial image, not just because of the morbid moment it captures, but because of the fact that it even exists.

A little more background: the man in the image was 58-year-old Queens resident Ki Suk Han. He was reportedly pushed onto the tracks at 12:30pm by a panhandler who had been harassing passersby. Han had approached the man in an attempt to calm him down.

After being shoved into the path of the soon-to-arrive train, Han struggled desperately to lift himself onto the platform, but wasn’t strong enough.

R. Umar Abbasi, a freelance photographer for the New York Post, was present at the scene. He claims that after he was unable to help Han himself, he began using his camera flash to warn the train’s operator. He tells the Post, “I just started running, running, hoping that the driver could see my flash.” The train couldn’t stop fast enough.

Abbasi’s photograph above ended up being used as the paper’s cover photo today, along with a sensationalist headline: 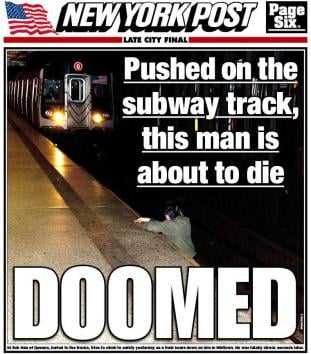 It seems that many people — at least those who comment on the New York Post’s website — aren’t buying Abbasi’s story. They’re leveling sharp criticism at the photographer, saying he prioritized capturing the photos over helping save the man’s life.

Here are a number of the comments:

Wow! enough time to take a few pictures. Why didn’t the person help? How many pictures did they take? 3-4 pictures. And nobody tried to help. Not one person. The pictures sure shows that much. What an age we live in when getting the picture is more important! I am appalled. [#]

How tasteless of the NY Post to publish such a grusome picture for this mans family to see. No one helped this man there were numerous videos and pictures being snapped, yet not one person tried to help save him. Disgusting. [#]

“I just started running, running, hoping that the driver could see my flash,” said Abbasi, whose camera captured chilling shots of Suk’s tragic fight for his life.” How do you sleep at night? [#]

I don’t believe a word of that photographer crap. He didn’t even try to help the guy get back on the platform. His first instinct was to take pictures, and that’s exactly what he did, because that’s what they do. He wasn’t out to “warn” the conductor, what a lame excuse for not helping. Well, he got his pictures. Everyone “gasped” – and no one helped. The guy looks skinny, couldn’t lift him up? Bull. And HE was actually trying to help THEM from the lunatic![#]

How does “taking pictures” tell a conductor to stop a train? Huh? Is this photographer guy a moron? Throw down your camera and run to help the guy. If you fail, at least you tried. Taking pictures isn’t trying. What conductor would think, “Oh, look, someone’s taking pictures…maybe I should stop the train.” [#]

OMG – the person who took that picture should be ashamed of themselves! How do you take a picture of a man about to be hit by a train instead of trying to help him off the track! [#]

We wonder: would the reaction to Abbasi’s photo have been different had he simply said he was doing his job rather than using his camera flash to warn the train operator?

The outcry is reminiscent to what photojournalists Kevin Carter and Frank Fournier experienced after each of them shot an award-winning photo of a dying individual.

Carter’s famous image of a vulture staring at a starving child won him a Pulitzer Prize (and likely contributed to his later suicide).

Fournier photographed the slow death of 13-year-old Omayra Sánchez after the 1985 eruption of the Nevado del Ruiz volcano. The image won him the World Press Photo of the Year prize that year, but also caused many in the public to label him a “vulture.”

Abbasi’s actions will likely be vigorously debated for days to come, with some placing him in the same camp as Carter and Fournier — men who were simply doing a necessary job — and others condemning him for being a heartless photographer.

Update: Abbasi appeared on the Today Show this morning to give an interview regarding the photo.

Thanks for sending in the tip, Sam

BTS: Building and Using the Largest Film Camera in the World