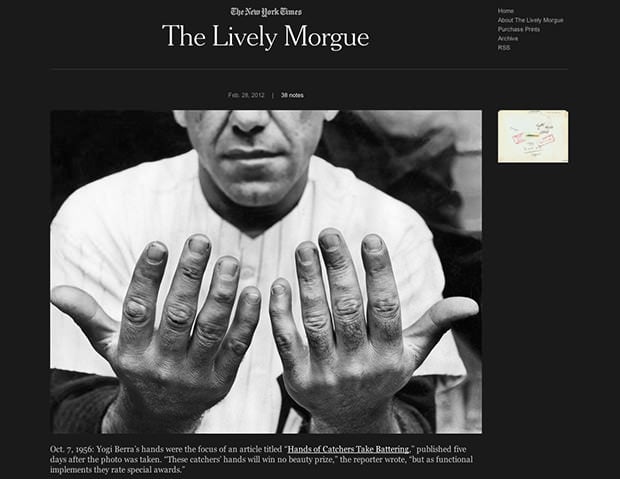 The New York Times has launched a new Tumblr site called “The Lively Morgue” to breathe new life into items in the newspaper’s photo archive (nicknamed “The Morgue”). Each week they’ll be sharing several historical photographs found in massive collection. Just how massive?

We don’t know. Our best guess is five million to six million prints and contact sheets (each sheet, of course, representing many discrete images) and 300,000 sacks of negatives, ranging in format size from 35 millimeter to 5 by 7 inches — at least 10 million frames in all. The picture archive also includes 13,500 DVDs, each storing about 4.7 gigabytes worth of imagery. When the Museum of Modern Art set out to exhibit the highlights of the Times archive in 1996, it dispatched four curators. They spent nine months poring over 3,000 subjects, working with two Times editors, one of whom spent a year on the project. In the end, they estimated that they’d seen only one-quarter of the total. [#]

To make the project even more interesting, they’re also publishing an image of the reverse side of each print. This often reveals information such as how often the image was used, notes by the photographer, and the original caption that was chosen.

The Lively Morgue (via NYT)