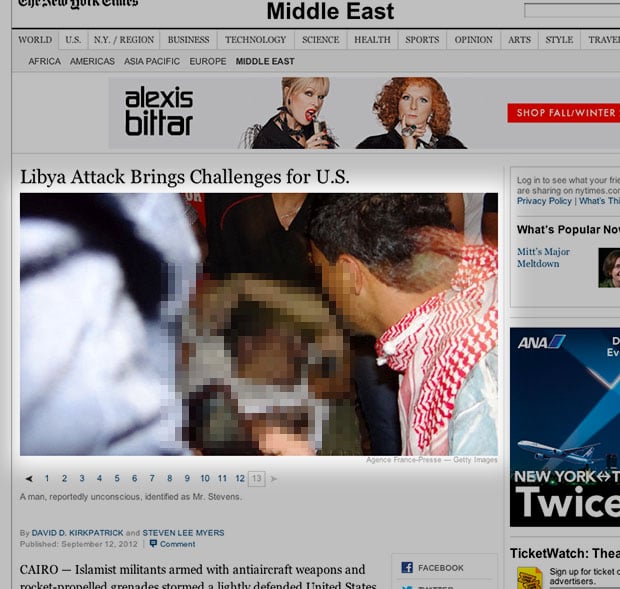 On Tuesday, the U.S. consulate in Benghazi, Libya was attacked by militants, resulting in the deaths of ambassador J. Christopher Stevens and three members of his staff. In an article reporting on the attack, The New York Times included a photograph that reportedly showed a bloody and unconscious Stevens, moments away from death. The image caused outrage with some readers, and soon attracted the attention of the United States government, which asked the Times to pull the photo. The Times said no.

Here’s how Philip B. Corbett, an editor at the Times, responded to the State Department request:

We understand and are deeply sensitive to the grief and anger surrounding the killing of Ambassador Stevens in Libya. Times editors had long discussions about the decision to include a photo of him after the attack as part of our online report.

Such decisions are never easy, and this one was harder than most. But this chaotic and violent event was extremely significant as a news story, and we believe this photo helps to convey that situation to Times readers in a powerful way. On that basis, we think the photo was newsworthy and important to our coverage. We did, however, try to avoid presenting the picture in a sensational or insensitive way.

Unfortunately, our news coverage sometimes demands visual depictions of terrible events — bombing victims, famine victims, crime victims, fallen soldiers. We regret the pain this can cause to families and to other readers, but we feel the decision in this case is the right one.

Joerg Colberg of Conscientious argues that people who don’t “exist as a mental image in the larger public’s mind should be granted the dignity […] not to have her or his dead body shown in a news context”:

This whole controversy revolves around the question: where does news end and exploitation begin?

Panorama Mode Not Exclusive to iPhone 5, Will Be Available Through iOS 6