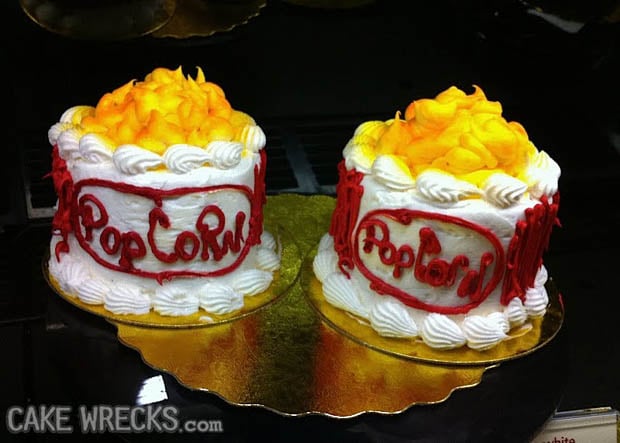 The Internet often has a mind of its own when it comes to viral photos, the spread of which is virtually impossible to stop. Safeway, the second largest supermarket chain in North America, found this truth out recently after photos of badly designed cakes made their way online. The company is doing its best to quell the mockery, though: apparently at least one local Safeway bakery has gone so far as to ban photos entirely.

Cake Wrecks is a website dedicated to photos of professional cakes that have gone horribly wrong. It recently received an email from a reader named Dara, who writes,

My local [name censored] bakery has this new policy – not strictly enforced, but kinda enforced — NO PHOTOS in the bakery department. None, nada. Per an ex-employee there, upper management is afraid that one of that store’s specific cakes will be posted on ‘that bad cake site.’ Per what they tell you in the store, their cakes are ‘all copyright protected.’ […] Apparently this new ‘no photos’ thing came about after y’all had posted their ‘Popcorn’ cakes on the site.

Dara is referring to a series of photos showing “Popcorn” cakes that look more like they’re filled with gobs of goo. If Dara’s account is accurate, it’s interesting that a store is citing copyright law to prevent its baked goods from being photographed (and subsequently ridiculed).

Ways To Play It Safe [Cake Wrecks via Boing Boing]

Winner of GDT European Wildlife Photog of the Year 2012: “The Stargazer”