If you’ve been following the news over the past week, you probably know that the Space Shuttle Endeavour spent October 11-14 rolling through the streets of Los Angeles, going from the Los Angeles International Airport to its new home at the California Science Center. News crews and large camera-wielding crowds were constantly by the shuttle’s side, documenting its progress.

For those of you who weren’t lucky enough to personally witness the neat sight of the giant shuttle moving through the city, check out the beautifully-made time-lapse video above that shows the four-day journey in under three minutes.

It was created through the hard work of six talented individuals led by Matthew Givot. The team spent four days and four nights tirelessly photographing the shuttle for the frames that make up the video. 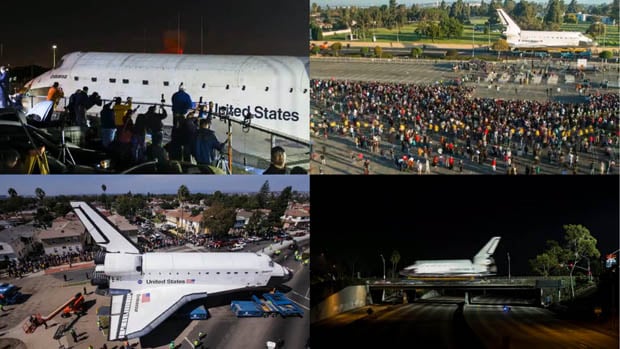 Here’s an explanation Givot sent us of how the project came about and came together:

None of this would have been possible without The City of Inglewood, Chief of Police Mark Fronterotta, Lieutenant James Madia, Sergeant Dirk Dewachter, and the men and women of the Inglewood Police Department. Dirk had seen some of my previous LA work online, and reached out to me to see if this is something I would be interested in. It also helps that he is a professional photographer, so he understands the importance of access and locations. It did not take much for us to realize what an amazing once-in-a-lifetime opportunity this was.

After scouting the locations, I knew that this was a project that was going to take more manpower. Time-lapse is a special trade that not only requires skill but also patience and passion. It’s a small community, so I was able to get a few of the best LA guys to come join in the fun. This film would have never worked without these guys: Joe Capra, Chris Pritchard, Brian Hawkins, Andrew Walker, and Ryan Killackey.

We started Thursday morning and finished Sunday night. You have to LOVE what you do if you are going to work straight for 4 days with little-to-no sleep. I can truly say that we all love what we do and would do it again.

We used Canon equipment mostly: the 5D Mark III, the 5D Mark II, and a few 7Ds. We also used motion controlled devices. One device we all have and love is the eMotimo TB3. It’s extremely portable and can provide some great motion to your shots. In conditions like this, it is crucial to be mobile. All of the panning shots in this film used the TB3.

I have to say though the biggest thing I’ll remember from this experience are the people of LA. It’s very moving to see people come together with excitement and pride in their hometown. At one point I was near a barricade shooting and there was a massive crowd right next to me. It had to have been 90 degrees outside. The police came up and let the people know that the shuttle would be delayed by 4 hours. I was amazed to see that no one left; they just waited with the same enthusiasm for 4 hours.

It was an honor to be a small part of this, and my hope is that our film captured some of that excitement. I did not want this to be a time-lapse of the move, I wanted it to show the heart of Los Angeles — timelapse was just the format.

Bryan Chan of the Los Angeles Times also made a time-lapse of the event. If you enjoyed the one above, you should definitely check out the LA Times’ as well.

Update: We’ve gotten permission to embed the LATimes time-lapse. Here it is: