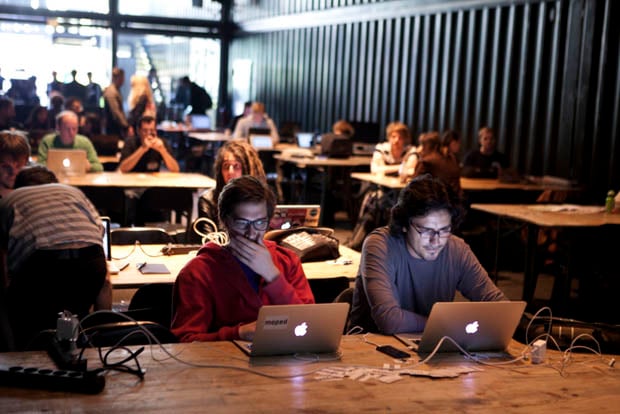 On September 22nd, more than 100 developers descended upon Berlin to compete against each other in building the best photo app they could within 24 hours. After a long, sleepless night and thousands of lines of code, 27 new photo apps were born. Here’s a look at the top three that won the competition.

The winning app was Helmut, which calls itself the “fastest film scanner in the world.” The app is designed to be a cheaper and less painful alternative to having your film scanned in a lab or tediously doing it yourself. It consists of a simple box and an Android app. Once you put your film inside, the app “scans” the photo by snapping a photo, and then does some fancy digital mojo to turn it into an acceptable digital photo (e.g. inverting it, balancing the colors, histogram equalization, and more). Scanning a negative in this way takes only a few seconds.

This app is designed to remove tourists and other non-static objects from scenes. By snapping multiple photographs of a scene, it can composite them into a single photo that only shows the static background — voila, clutter gone. It’s an idea that we’ve already seen recently. Scalado (now a part of Nokia) unveiled something similar but fancier a while back, called Scalado Remove:

Visual Weather is like a weather app that uses Flickr photos to provide a visual look at what the weather will be like. Instead of showing you what the outside world looks like (there’s other ways to get those images), it takes the current weather conditions, compares them to historical weather data, finds a similar day in the past, and then finds photos of what that day looked like at your location. The source code for this project is available online, in case you’d like to take a look.

It’s interesting seeing what people can hack together in the course of just 24 hours. This is the second Photo Hack Day we’ve written about this year — a couple of months ago, a bigger one was held in San Francisco. If you’d like to see a complete list of what was made at the Berlin event, visit this page.