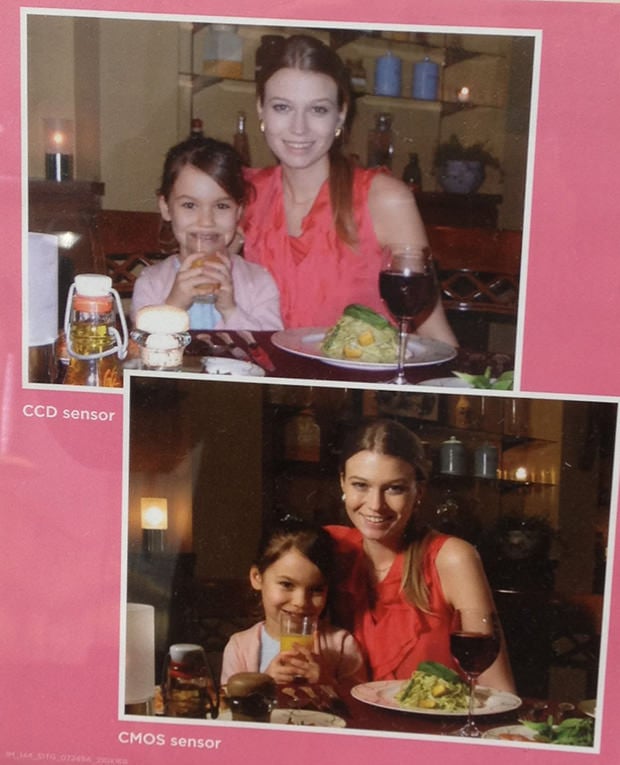 Virtually all digital still cameras capture light using either a CCD or a CMOS sensor. Most consumers don’t know the difference, and — given the rate at which CMOS sensors are improving — both sensors perform equally well in most cases (Leica is rumored to be switching over to the CMOS camp with its upcoming M10).

However, that’s not what a PC World store in Ireland wants you to believe. The photo above shows an informational placard that was on display recently in one of its stores. The top image shows a scene shot with a CCD sensor, and the bottom image allegedly shows the “same scene” shot with a CMOS sensor. Hmmm…

In reality, it’s pretty clear that the discrepancy is the result of something other than the sensor inside the camera (it might even be the same sensor). From the overall look of the picture and the reflection in the wine glass, we can conclude that the main difference is in the lighting used.

The top photo was shot with a flash pointed directly at the subjects, while the bottom one looks like it was lit with indirect lighting. Clever marketing? Nah. False advertising.

To actually learn the differences between the sensors, check out this Wikipedia article, this StackExchange answer, or this HowStuffWorks article.

Using Photos to Communicate While in a Foreign Country