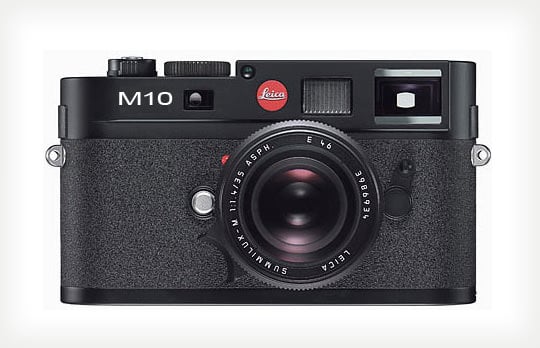 The new Leica M10 will almost certainly be announced at Photokina next month, and may have quite a few “firsts” for a camera in the M rangefinder lineup.

In addition to confirming the launch date, Leica reviewer Steve Huff writes that that the camera will likely hit store shelves in late February or early March 2013.

The rumored specs for the camera are quite interesting. As suggested by alleged photos leaked back in July, there is a strong chance that the camera will feature live view.

The guts will reportedly be a 24 megapixel CMOS sensor — a big change from the previous digital Leica M cameras, which contained CCD sensors manufactured by Kodak. While it’s unknown who the new CMOS sensor will be provided by, it seems that Leica might be moving away from the Kodak sensors — especially since the business was sold to a California based investment firm.

Finally, a fact about the camera that you don’t need rumors or a crystal ball to figure out: it’ll be pricey. Expect a hefty Leica-style price tag of around $7,000 to $10,000. Time to start saving up!

Image credit: Photo by Art of the Story

Review: Dodge & Burn is a T-shirt Brand Photo Enthusiasts Can Be Proud Of