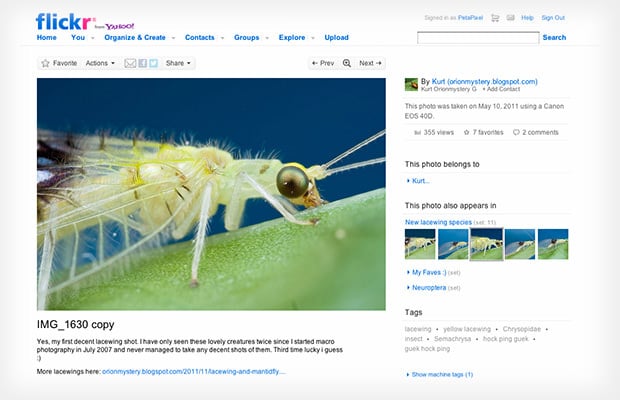 California-based entomologist Shaun Winterton was browsing Flickr back in May 2011, when he discovered a new species of insect.

That’s right: he made a scientific discovery by simply looking at pictures online.


According to NPR, Winterton was looking at some pictures by Malaysian photographer Guek Hock Ping, when he spotted some photos of a green lacewing. Quite familiar with the insect, Winterton was surprised to see patterns on the wings that he had never seen before.

Here’s one of the images in the set of pictures by Guek:

After sending the photograph to some colleagues and hearing the same thing, Winterton realized that the image showed a new species of insect.

He then contacted the photographer, who informed him that the image was taken the the jungles of Malaysia. Without a specimen, however, there was no way to learn whether the image was in fact a new species — or simply some kind of outlier.

One year later, Guek returned to the spot, found another identical lacewing, and this time trapped it in a jar. The specimen was then sent to an entomologist in London and confirmed to be new. The discovery was recently published in the scientific journal ZooKeys, with the new insect named Semachrysa jade after Winterton’s daughter.

Makes you wonder: what else will be discovered by mankind by browsing online photos?