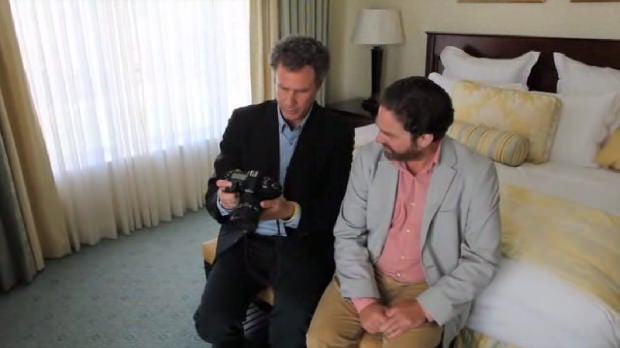 Imagine you’re a staff photographer for a morning news show and you’re told you will be photographing hilarious movie stars Will Ferrell and Zach Galifianakis for a piece on their upcoming movie The Campaign. Yipee right? Well, now imagine the next sentence you hear from your photo editor is that you’ll have only three to four minutes before they have to move on, and the whole shoot has to take place in the hotel room where you’re meeting them. Excitement gone; panic sets in.

That’s the situation photographer Jeff Lautenberger of The Dallas Morning News found himself in a couple of days ago. No time, bad “studio,” and no lighting equipment:

There was not much to work with. It was a typical hotel bedroom, which still had luggage and bags leftover from assistants and staff on the Campaign press tour. Thankfully, the bed was made. Even more important were the two windows that had soft white curtains acting as a natural softbox; I knew I’d have no time to set up artificial lighting in the short time I was given.

I scanned the room, visualized the natural light and thought where to pose them once they arrived. There was a bed, and a bench at the foot of the bed.

They walk in, and their eyes turn to the freshly made untouched bed…

Will: “It’s the perfect setting.”

Zach: “We always end up doing these photo shoots in bed.”

Zach: “Does this have anything to do with the photo shoot or are you just asking in general?”

Well, on the bright side, at least the talent was funny. Three minutes or not, that’s not something you run into at every photo shoot. For the whole story, including some impromptu photography by Will Ferrell, head over to The Dallas Morning News’ Photography Blog.

The Reasons and Myths Behind the “No Flash Photography” Sign