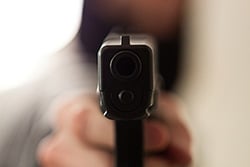 Portuguese photographer Antonio Simoes was in South Africa to shoot the World Cup when he was robbed at gunpoint in his hotel room yesterday morning.

Two men entered his room at the Nutbush Boma Lodge at about 4am, pointed a gun at his head, and stole roughly $35,000 worth of camera equipment. Two other journalists staying in the hotel were also robbed that same morning.

One of the guys pointed a hand gun at my head, and then they took all my gear — cameras, lenses, laptop. Then they told me to lie on the bed and they covered me with a blanket, pressed the gun against my head and told me to sleep.

$35,000 worth of gear… Wow. Any guesses to what he was carrying that adds up to that figure? If you’re going to be photographing in South Africa this summer, be careful.

Image credit: The Robbery by gcfairch