It looks like the massive Panasonic leak we reported on yesterday was like garden vs fire hose when you compare it to the announcement spree that the company went on today. In addition to the the Lumix DMC-G5 mirrorless camera that we had the most details on yesterday, Panasonic also announced five new compacts including the FZ200 superzoom and high-end LX7 compact.

Ironically enough, the biggest camera announced was also the one with the fewest major improvements when compared to its predecessors. As the leak suggested, the G5 comes with essentially the same 16.05MP Micro Four Thirds sensor found in many of the older Panasonic ILCs, with the major improvement coming in the form of a new Venus Engine processor.

The processor, which boasts an 18% increase in performance, comes alongside otherwise small improvements: full 1080p 60fps video capability, a new tap-to-focus system (which also works while shooting videos), a 1.44-million-dot electronic viewfinder and a 921K-dot articulating LCD. No word yet on when the white, black and silver G5 will make its store debut, but the press release did say that Panasonic will announce pricing and availability 30-days prior to shipping (although B&H already has the 14-42mm kit up for pre-order at $799). Other than the mirrorless G5, the remainder of the announcements were compacts/superzooms, with the FZ200 leading the pack as the most well-rounded. As far as features go, the most impressive on the FZ200 is its 24x zoom (25-600mm equivalent) Leica lens that maintains f/2.8 throughout the entire range. Other features include a 12.1MP MOS sensor, electronic viewfinder, full-HD 1080p 60fps video recording, stereo microphones, a plethora of scene modes and filters and the LSI Venus Engine processor that allows it to shoot 12fps in burst mode.

As with the G5, the press release has details on pricing and availability only arriving 30-days before it ships. But also like the G5, you can find the camera for pre-order on B&H, this one going for $599. 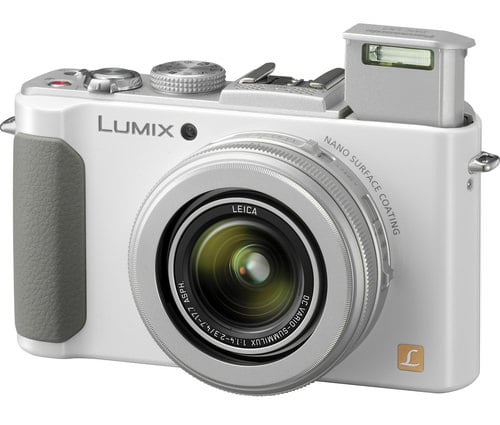 Rounding out the more impressive announcements today was Panasonic’s new LX7 high-end compact, whose claim to fame is a superfast Leica f/1.4-2.4 3.8x ultra-wide-angle zoom lens with an equivalent starting focal length of 24mm. Beyond that the LX7 offers a 1/1.7″ 10.1MP MOS sensor, Venus Engine processor, full-manual controls, 3-inch 920K-dot LCD, a hot shoe, Time Lapse mode, full-HD 1080p 60fps video capability in AVCHD (only 30fps MP4) and many more features that you can find in the press release.

The last of the cameras announced to get its own release, Panasonic yet again stated that pricing and availability will be available 30 days before launch, and yet again both the black and white options are up available to pre-order on B&H, with a price tag of $499.

Panasonic rounded out the announcement-fest with three more compacts. The first, the SZ5, is an otherwise average Lumix compact with a built-in WiFi radio. The radio is the coolest feature because it enables you to use your smartphone as a viewfinder. You’ll also be able to use your phone’s GPS functionality to location-tag your images and share them to your favorite social networks.

The final two cameras are both standard superzooms, the FZ60 and LZ20, which are able to do 24x and 21x optical zoom, respectively. The FZ60 is the FZ200’s younger brother, sporting a 16.1MP MOS sensor, Venus processor and the ability to shoot up to 1080i video. The LZ20, on the other hand, can only get 720p video out of its 16MP CCD sensor.

All three cameras are currently available for pre-order on B&H, although we again don’t know when they will actually end up on store shelves. You can preorder the SZ5 for $199, the LZ20 for $249, and the FZ60 for $349.