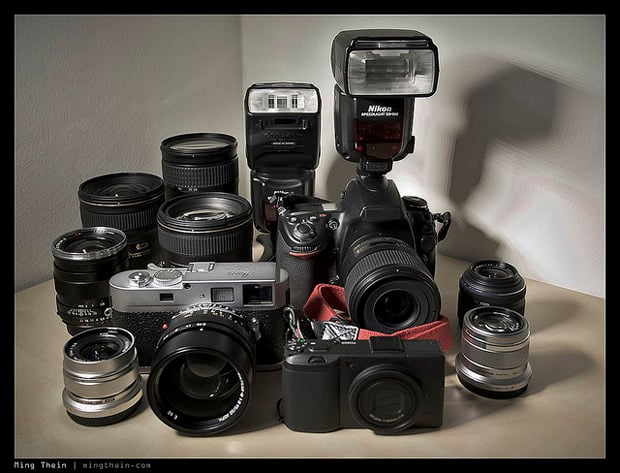 This small mountain of gear leads to two very frightening thoughts. Firstly, there’s no ending in sight; one keeps accumulating more and more equipment in order to keep pushing the edge of what’s possible both from a compositional and artistic standpoint, as well as from an image quality standpoint. You’ve either got to have a great day job and very deep pockets, or some good recurring clients.

The second thought is around obsolescence. In the film days, the camera body and lenses lasted a long time; you invested in glass, got a decent body – one that fulfilled your personal needs as a photographer – and then picked the right film for the job. In that sense, image quality differences between brands were down to the lenses and the photographer. This is to say that if you put the same film in every camera, the difference in sharpness or acuity or color or whatever would be down to the lens only. If you wanted more image quality, you went for a bigger format – and thus a larger sensor. The digital equivalent to this would be having only one photo site design of a fixed pixel pitch; say around 4.9 microns, which would get you 16MP at APS-C, 36MP at FX, about 60MP on 645, and something silly on large format. For an equivalent size print, the larger format would definitely outdo the smaller format by an amount proportional to the difference in resolution. 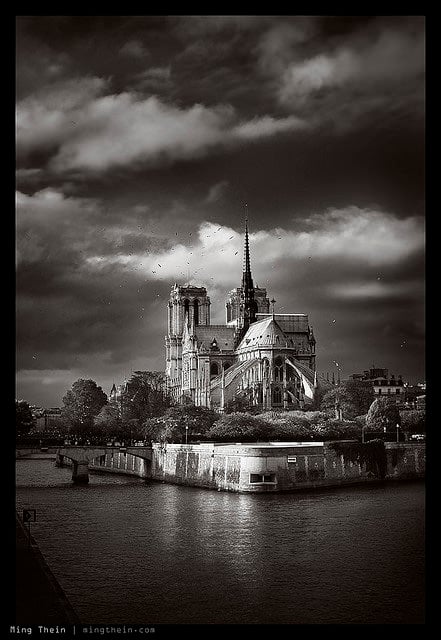 Except, that’s not quite the case, because there are technological tricks employed on some sensors that land up yielding image quality that isn’t quite where you’d expect along the size-quality curve. Bottom line: the camera body now plays a much more critical role in the imaging chain because it also contains the ‘film’, and this isn’t something you can change when the equivalent of a new emulsion is released.

Cameras from the 1950s and 1960s are still alive and well today – and in some cases, quite plentiful. Yes, some may have sticky shutters or mechanical issues due to neglect or lack of servicing, but the reality is that they were a) built to last and b) will continue to do a fine job so long as one can find film for them. The chemical process for film processing hasn’t changed much in the last forty or so years. Negatives can (probably) last hundreds of years with proper archival and storage conditions – how long, exactly, is anybody’s guess. 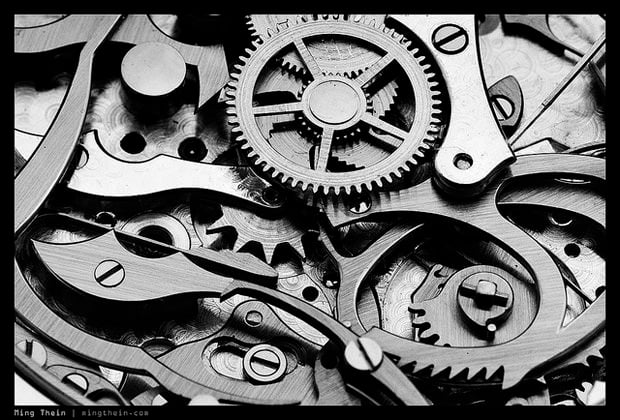 However, we’re facing some very real issues with digital, and ones that matter to all digital photographers. Let’s examine these individually.

Camera life. In the film days, shutters may have been rated to 50,000 or so exposures for a professional body – the reality is that nobody but a professional would shoot this many frames; film always has a per-shot cost and effort cost associated with it. You think a bit harder before letting off a frame, and this generally results in fewer frames but more keepers. Since digital is free, photographers experiment a lot more (and learn a lot faster) – but this means that you’re probably going to wear out a shutter if you are a dedicated shooter and keep a camera more than a few years. Even the professional grade cameras have shutters rated to around 300,000 or so exposures; I know of many sport photographers whose cameras are well over the million-frame mark. I’ve had to replace shutters a couple of times on my own cameras. This in itself isn’t a big deal, so long as parts are available. However, if something goes wrong with the electronics, your camera becomes a brick the minute the manufacturer runs out of spare circuit boards – the chips are not something you can repair with an experienced hand, unlike mechanical shutters for instance. Lenses. Even modern lenses are not immune to this – yes, they all still use glass and helicoids, but they also rely on a lot of electronics to control autofocus and aperture functions. Let’s not even talk about those with magnetically-activated gyroscopes for stabilization. Even the coreless ring-shaped motors used to achieve fast focusing aren’t infallible; early Nikon AFS lenses are notorious for requiring that expensive repair once the lenses start making squeaking noises. Again: you’re up one of those brown creeks with no paddle if something electronic gives way. The sole exception to this is the entirely mechanical glass by Leica and Zeiss; those will probably survive the apocalypse.

Batteries and cables. Anybody who’s got an older camera that uses Ni-MH or Ni-Cd cells is going to relate to this one instantly: once the batteries are no longer available, you’ve got a brick. And the inherent nature of the chemistry means that this can be as short as five years, or perhaps ten if you’re lucky. I’m glad I don’t have any that fall into this category, but I do have some lithium cells that were so heavily used that they’re pretty much useless now; I’d be worried about not being able to get replacements for these in the future. (Fortunately, I’m paranoid about spare batteries, so I have at least two for each camera I use.) Once supplies dry up off eBay, that’s probably the end of the line – and who even knows how old or new those stockpiles are. One thing I really hate about some cameras is the necessity to use proprietary connectors for things like video out or even USB – if you lose or damage that little adaptor or cable that came in the box with the camera, you’re probably out of luck getting a replacement unless there’s a huge ecosystem for the camera – but so far, no camera connector has reached that kind of popularity. At least some makers see sense and use standard mini-USB cables or 3.5mm minijacks. And putting the two together, the same of course goes for battery chargers… Storage media. This one concerns me quite a lot: we’ve already seen big shifts from one type of digital media to another, with almost zero support once a type of card or drive or storage goes out of fashion. Self-burned CDs from just a few years ago seem to be hit and miss when it comes to readability; early DVDs are a tossup because of the format used; and has anybody tried to mount an old drive recently? They don’t always work. I’ve found the best way to keep your files and backups accessible is to use external hard drives, limit the amount of uptime they have (if you’re not using them, don’t turn them on) and change them every couple of years. This serves several purposes: firstly, maximizing forward compatibility; secondly, giving you more space; thirdly, hopefully more reliability as technology matures; and finally, the old drives can be kept somewhere as an incremental backup. And drives fail, too – you might want to take a look at my article on storage and backups.

Online. If you’re storing files online, make sure you have an offline backup. I’m sure Kodak Gallery had a lot of users at one point – at least until they shut down this month. I dread to think what’s going to happen to their servers when everybody’s aunt and uncle suddenly realize that all of their photos are there and must be downloaded immediately, or worse still, forgets completely they’re there at all. The problematic thing is that there is usually no automated backup for these things – you have to download the images one by one. If say Flickr went down, I’d lose the 13,800 or so images I’ve got there – at least the small, web-sized archives – and that wouldn’t be so critical, except that all of the images from this site are hosted there. Still, it would be recoverable – but not great. And problematically, there’s no way of executing a backup to this, either.

File compatibility. Of all the future proofing problems faced by us digital users, this is by far the biggest. I’m no so worried about JPEGs, because it seems that as a format it’s here to stay; even the improved JPEG 2000 format introduced by the same group that created JPEG compression originally didn’t really make much of a dent in the photography world. What worries me more is the ability to open all of those RAW files in future; so far, Adobe Camera Raw is doing a great job of maintaining full compatibility with older cameras (which explains why the update files are now enormous), but I wonder what will happen if that platform shifts in future. We can only hope the size of the demand for such support is large enough to support a continuing market for such products. A second set of DNG files may be an option for increased future proofing. However, it’s well-known that ACR isn’t the best converter for all files, and better image quality can be obtained via other converters for specific cameras – so I’d be concerned about what information isn’t being fully captured and transferred over. I don’t have a solution for this other than keeping a full set of uncompressed TIFF files, whose encoding is relatively simple and shouldn’t be too difficult to retain support for in future. There’s one final issue I’d like to touch on in this article, and that’s the ecosystem. I’m not about to go greenpeace; I’m referring specifically to the support tech that’s required to maintain a full digital workflow; this includes everything from the memory cards to cables to batteries to the computer involved. Image quality competitiveness aside (more on sufficiency in another article), I think you’re going to have to think about a full upgrade cycle for your support gear every three to five years. It’s no longer your camera body you’ve got to cost in, but also a new computer to handle the larger files, Photoshop upgrades to get the most out of those RAW files, bigger memory cards and hard drives to store everything on, maybe even a higher resolution, more accurate monitor. And all of this of course costs money.

There are two ways of dealing with this – as a hobbyist, I’d recommend buying one complete (and compatible) set, then using it until one critical component dies or absolutely has to be replaced. This should get you at least five years of use, probably more. The upside is lower money out, but also close to zero residual value. As a professional, you probably have to consider the other extreme – upgrade as soon as an improvement is available. Your used gear still has resale value, and this can be used to offset the upgrade costs. Incremental upgrades to the supporting equipment can be made with relatively small spending. (I don’t like to use the word ‘investment’ when it comes to equipment, because it is really a losing proposition.) It also keeps you competitive. I’m a masochistic early adopter, so I’ve always taken the latter route. I think it’s very important to pick one approach and stick to it (or buy film, then consider owning only one camera and lens for the rest of your life) – otherwise you’re going to be stuck in the expensive no-mans’ land inn the middle.

First Photograph of an Atom’s Shadow