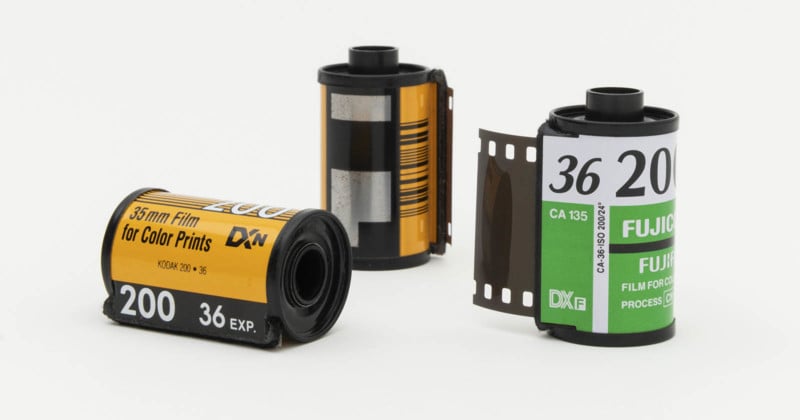 The delayed gratification of film photography pays dividends. While computers speed up the process incredibly, digital photography remains mere data until printed. Film photography rewards photographers with the tingle of suspense, a purely mechanical workflow, and tangible results on physical film. It’s a great idea for serious photographers to experiment with film at some point in their journey, especially because it’s still very easy to find.


While film is certainly not as ubiquitous as it was in its heyday, there has been an analog renaissance in recent years as more photographers pick up old (or new) film cameras and as new film stocks are released to the industry.

If you’re looking to buy camera film, whether 35mm, 120, or any other format, you have come to the right place: this article is a guide to what types of film currently exist and where you can currently buy them.

Film photography offers amazing diversity, which partly accounts for its popularity. Manufacturers of film abound, and each makes multiple types of film for different effects. Even the big names in film still produce a range of film types, from classic to basic to specialty.

You might not have heard of Portra or Tri-X, but you’ve definitely heard of the brand that makes these legendary films: Kodak. For decades the name was synonymous with photography. While digital may have eclipsed much of Kodak’s business, the company proves that even corporations can make cool film and fun cameras like the Ektar H35.

Both Fujifilm and Polaroid dominate the instant film market, a genre that blends the immediate gratification of digital photography with the timeless look of film.

All major camera stores still sell film. This fact proves the legacy status of film photography. Visit a big-name camera retailer in-store or online and you’ll find great collections of all the film brands listed above, plus selections of specialty films listed below. They also stock the chemicals and equipment necessary for film processing, developing, and printing.

Obvious retailers include Adorama and B&H Photo, but other big stores like KEH and Samy’s also sell all sorts of film. Next time you’re on their websites browsing digital photography equipment, get curious and have a look at their film photography supplies.

The New York City-based camera superstore Adorama carries a wide range of photographic film from some of the most reputable manufacturers, including Fujifilm, Ilford, and Kodak.

Adorama rival B&H Photo Video, also based in NYC, also carries all the major brands of film in instant, 35mm, 120, and more.

Based in the Smyrna suburb of Atlanta, Georgia, KEH is a photographic retailer whose main focus is the reselling of used camera equipment. However, the company’s online store also sells a large selection of (brand new) camera film.

Founded in 1976 on Fairfax Boulevard in Los Angeles, California, Samy’s Camera is a major retailer in both digital and analog photography equipment, including camera film. The store says it has “one of the largest inventories of 35mm, medium format, large format, and specialty films in America.” Many of the films available through Samy’s are also available with multi-roll pricing.

In addition to offering a vast selection of both mainstream and specialty films, Unique Photo offers discounts for photographers buying 10+ and 20+ rolls of film. Regular customers can also stack up loyalty points for credit toward future purchases.

For over 75 years, Freestyle Photographic Supplies has provided photographers with photo and imaging supplies, including an impressive selection of film stocks. The company even launched its own affordable line of film called Arista.Edu for photography students (more on that below).

Amazon, the online retail juggernaut that essentially sells everything under the sun, carries an extremely wide selection of films at very competitive prices. Even if Amazon itself does not sell a particular film stock or is out of inventory, 3rd-party sellers step in to fill the gaps and help ensure you can buy the film you’re looking for.

Walmart may be Amazon’s closest online retailing rival, and it also carries a wide selection of photographic films, including from 3rd-party retailers using the platform.

The online auction service and marketplace eBay has an endless number of listings of camera film for sale, and you’ll be able to buy both new film from retailers to huge film lots from individual sellers. You’ll want to pay attention to the seller’s rating and description, though, to avoid being stuck with something you weren’t expecting.

The pleasure of film also lies off the beaten path. Having become a genre of its own, film photography includes unique alternatives, both in film companies and retailers. This is where film photography most resembles vinyl records.

Something like Fujifilm, yet far more underground, Lomography makes cameras, lenses and, yes, film. Retro seems to be part of the Lomography mantra. Besides offering a gamut of 35mm black-and-white and color film types, Lomography also specializes in 120 (medium format) and 110 (pocket) film.

Dubblefilm brand film provides something different guaranteed. Special effects and tones, something like a filter on an Instagram photo, set Dubblefilm apart. Textures and vintage looks are on tap with each different film from this new brand. Ask any specialty film or camera store for Dubblefilm and they will likely have it.

A lesser-known film manufacturer with deep roots, Adox began in Germany in 1860. Today, Adox offers 35mm (and Super 8) film with an emphasis in the low ISO range. From ISO 20 to 160, Adox films allow for low light situations or fast shutter speeds at stopped-down apertures.

Holga carved out a name for its cameras and also offers medium format and 35mm film.

Based out of Los Angeles, California, CineStill is a company that has been creating photographic film for still cameras in 35mm and 120 formats using modified Kodak motion picture cinema film stock.

The classic film brand ORWO was founded in 1908 but faded into obscurity after the company was forced into liquidation in 1994. However, the brand has launched a comeback and has steadily been redeveloping and releasing new black-and-white and color film stocks.

Founded in 2009, Film Photography Project is a content publisher for film photographers that opened up an online store along the way. As it grew, the brand began creating and selling specialty hand-rolled, small-batch films that are now sold through other retailers as well.

Another more obscure film brand is Fomapan, founded in the Czech Republic in 1921 and still selling their signature take on photography.

FILM Ferrania is an Italian film brand that was originally founded in 1923 but ceased production of films in 2009. The brand came back from the dead in 2017, unveiling a new P30 B&W 35mm film with high silver content, ultrafine grain, and high contrast.

About as fun as exploring film brands and types, searching out independent film retailers opens the world of photography wider than you knew possible. Cities, and even small towns, across the country (and the world) secretly harbor some of the greatest camera stores in existence. These shops sell all sorts of film and typically also offer refurbished vintage film cameras and lenses.

Many of these small specialty shops also sell their goods online. Blue Moon Camera, in Portland, Oregon, sets the standard for independent film stores. They carry rare film like medium format Rera Pan 100S, and, like other hardcore film shops, they also offer services like processing and printing.

The Internet offers plenty more sources for analog photography. Film Supply Club is “an exclusive club for film shooting fanatics” that offers memberships for privileged access and pricing on a wide range of films. Members pay a “small fee” to be able to buy films at “wholesale prices.”

Based in London, England, Parallax Photographic Coop is a smaller photographic business that aims to be a fair and ethical retailer supplying the photography community with the film they love through a stable and sustainable supply.

Moment may be known for its lens attachments for smartphone cameras, but the brand runs a vibrant online store that’s filled with many different film stocks.

A Warning About Buying Film

Film has been around for a long while, so it’s easily available from resellers on websites like eBay. Many a photographer has scored dozens of rolls for a fraction of their original price, but others have been burned, almost literally. Purchasing film from private sellers comes with its savings and its risks.

The pros are obvious: saving money. Discovering a stash of discontinued Kodachrome film could be another benefit here, but really the idea is to keep your cash so you can buy more film. Plenty of old-school photographers were sitting on stacks of film when they purchased that first digital camera and fell in love with its ease and affordability. Now they’re keen to offload their film stocks and their darkroom supplies. Auction sites like eBay are a great place to find such scores.

Here’s the caveat: film is fragile. Any material that absorbs light in a millisecond and translates it into artistic beauty must inherently be sensitive. Film requires proper storage, which most often happens in the safety of a fridge or freezer, and, like any drug, it has an expiration date.

Be sure to check the date stamped on any roll of film you buy from a private seller. They might promise you it was stored correctly, but there’s no way to prove that. Expired or heat-affected film can, however, lend interesting effects to photos, so ending up with substandard film isn’t always a bust.

Popping a film canister, loading a camera, releasing a real shutter curtain, winding the film, waiting for the right shot instead of blasting off 500 frames in a day and awaiting the results all adds excitement to the photographic process. But each roll begins with choosing a film brand and type, a fun journey of its own.

Even now, a vast film industry remains robust and available nationwide. From camera megastores to the cult-status shops in your local area, film awaits your camera, mind, and eye. Where you buy your film might come down to a specific style or speed you’re after. Not every store can carry every kind of film. Fortunately, the film universe is still expanding, larger and more diverse than ever.

Have a recommendation for a film retailer that was omitted from this list? Leave a comment below and it may be added in a future update!