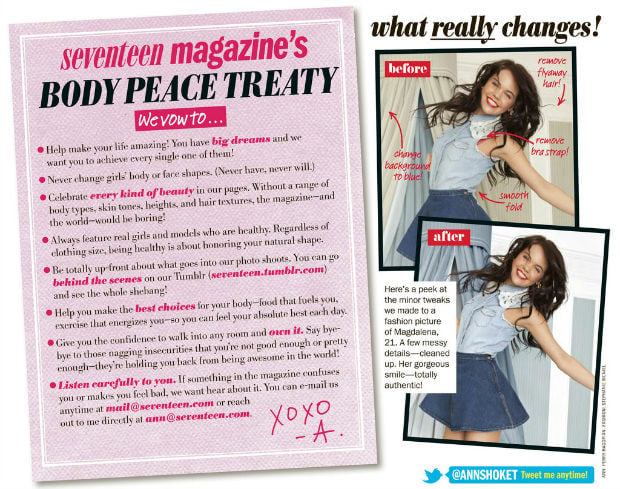 A few months ago 14-year-old Julia Bluhm caused quite a stir when she managed to collect over 80,000 total signatures in an attempt to get Seventeen Magazine to put one completely un-Photoshopped spread in each issue. Her argument was that the magazine’s readers have a sensitive body image, and constantly seeing unrealistically thin and perfect software-enhanced models wasn’t helping the matter.

Initially it seemed as if the magazine was going to do nothing more than meet with Bluhm and reassure her that she had nothing to worry about. But now, a few months later, Seventeen has finally stepped up to the plate and offered Bluhm and her supporters a peace treaty — specifically: a Body Peace Treaty.

The treaty (you can see a full-sized version here) consists of eight “vows,” and has been signed by everyone at the Seventeen offices. With it, editor in chief Ann Shoket hopes to put to rest any claims that the magazine alters body shapes or faces, and assure readers that, from now on, Seventeen will be more transparent regarding the few small Photoshop tweaks that actually do take place (a background change there, a stray hair removed here, etc.)

Admittedly, the treaty doesn’t mean that Seventeen will stop re-touching photos entirely, but the magazine has promised to be “totally up-front” about what goes into its shoots, so ideally it would have to divulge any alterations it chooses to make. And while it may not be perfect, Julia Bluhm and many people out there who supported her still have cause to celebrate today.

Feast Your Eyes on 135 Space Shuttles Launching in Unison