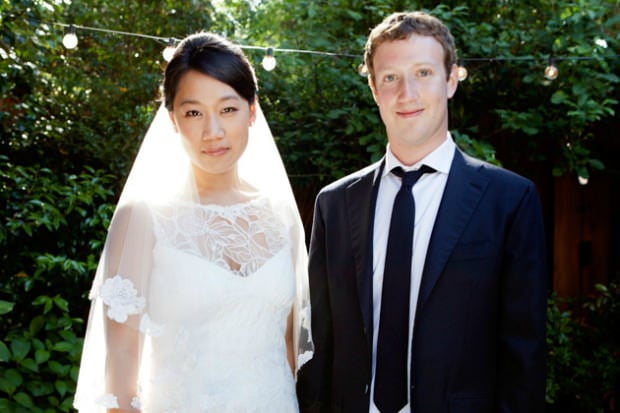 Not many wedding photographers get to shoot a wedding portrait that receives over one million Facebook likes, and not many more go to a wedding expecting to shoot a graduation party. But that’s the story of photographers Noah Kalina and Allyson Magda, and their experience shooting Mark Zuckerberg and Pricilla Chan’s secret wedding.

Noah Kalina — known for his uber-viral everyday timelapse video — shot the photograph you see above, the same photo that was attached to Facebook CEO Mark Zuckerberg’s status-update wedding announcement that garnered over one million likes. Kalina, who met the couple at a mutual friend’s wedding, received a call from Zuckerberg’s then wife-to-be Priscilla Chan the day before the wedding, hopped a plane the next morning, and arrived with only a couple of hours to spare. He shot the photo using a Canon 5D Mark II and a 24-70mm lens, and says that he spent 15 minutes editing the resulting photographs.

Allyson Magda, a NorCal-based professional photographer, was told what everyone else who attended the wedding was told: that it was a surprise graduation party for Priscilla. Even though the trick has been done before, prompting Magda to assume something fishy was going on, the wedding photographer couldn’t be sure she was actually shooting a wedding until she arrived at the Zuckerbergs’ Palo Alto home.

Details on the wedding itself are still slim, since everyone in attendance (including the photographers) agreed not to disclose any specifics. But what we do know we know because of the pictures that have been released: one ultra-popular portrait taken by a photographer who doesn’t even do weddings, and the rest by a wedding photographer who thought she was shooting a graduation party.

(via Forbes and Businessweek)

An Infographic on Color Temperatures