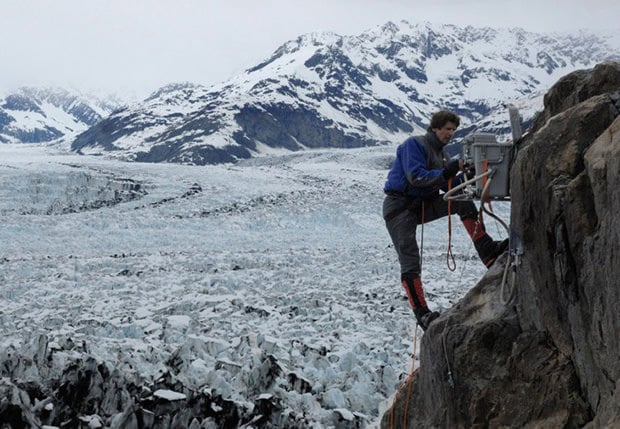 The Extreme Ice Survey (EIS) is a multi-year project by National Geographic photographer James Balog that aims to make show climate change in action through time-lapse imagery of glaciers. Balog has 27 Nikon D200 DSLRs pointed at 18 glaciers around the world snapping 8,000 photographs each year while powered by solar panels. His custom-designed rigs — created through months of trial and error — also include heavy duty tripods, waterproof cases, and wind-proof anchors. He has also created a documentary film about his project titled Chasing Ice.


Here’s a clip from the film, which is screening at SXSW this week:

But the technology innovated by Balog and his team doesn’t just allow EIS to take those pictures: the Survey aims to put them to good use. Balog, who had been a skeptic about climate change until about 20 years ago, says that seeing the evidence of climate change may make a difference where human stubbornness otherwise persists. He takes a zen perspective on change, believing that whatever landscape is underneath the glaciers, to be revealed by their melting, will also be perfect in its own way, but says he is disheartened by the extent to which people refuse to recognize their place in causing that change and its inevitable climatic, political and military consequences.