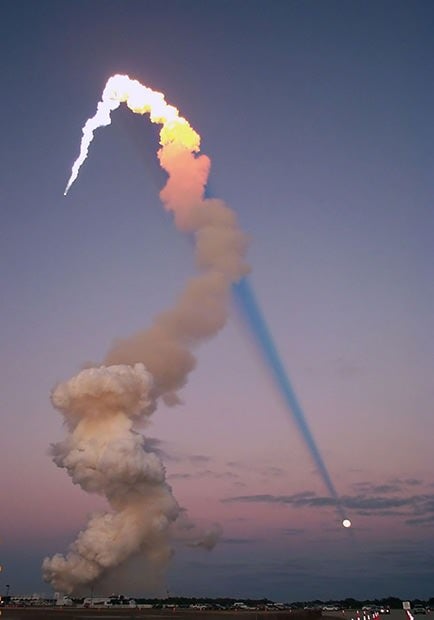 During a 2001 launch of the Space Shuttle Atlantis, NASA photographer Pat McCracken captured this amazing photograph of the shuttle’s smoke plume casting a shadow across the full moon rising in the horizon.

[…] the Sun, Earth, Moon, and rocket were all properly aligned for this photogenic coincidence. First, for the space shuttle’s plume to cast a long shadow, the time of day must be either near sunrise or sunset. Only then will the shadow be its longest and extend all the way to the horizon. Finally, during a Full Moon, the Sun and Moon are on opposite sides of the sky. Just after sunset, for example, the Sun is slightly below the horizon, and, in the other direction, the Moon is slightly above the horizon. Therefore, as Atlantis blasted off, just after sunset, its shadow projected away from the Sun toward the opposite horizon, where the Full Moon just happened to be. [#]

Talk about a one-in-a-million shot…

Bluetooth Headsets Double as Wireless Shutter Releases for the iPhone