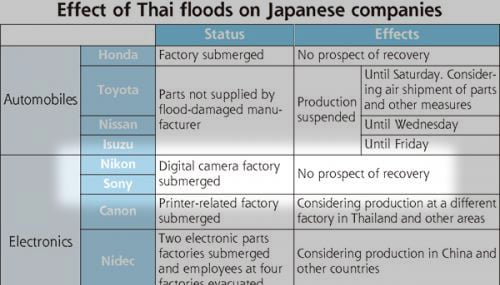 A week ago we shared a photo showing Nikon’s factory in Thailand submerged due to the catastrophic flooding happening there. The latest news is that both Nikon and Sony have had their camera factories severely damaged, which may have cause delays of at least 1-2 months. 90% of Nikon’s SLR cameras — the low to mid-range ones — are produced at the company’s Thailand plant, while 100% of Sony DSLRs are made at its now-damaged factory.

Nikon was expected to announce a new DSLR by the end of this year, but it seems like that may be postponed indefinitely at this point. Sony’s new NEX-7 and A65 cameras have been pulled from Amazon due to “manufacturing concerns”.

(via The Nation via 43 Rumors)