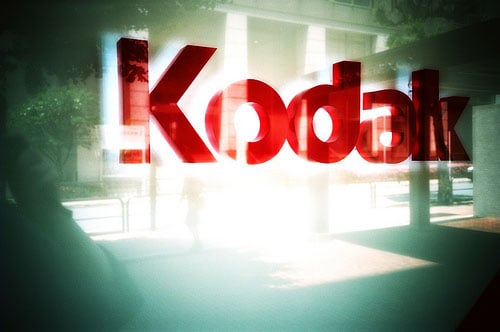 Talk about a Kodak acquisition seems to be heating up as giant tech companies — including Google, Microsoft, and Apple — continue to engage in a patent-hoarding war. Just two days ago, Google agreed to acquire Motorola for $12.5 billion in order to snatch up the roughly 25,000 patents owned by the handset maker. Bloomberg writes that the patents held by Kodak may be worth five times more than the company itself, making it a prime acquisition target:

If Kodak’s patents can command $3 billion, acquiring the company would outweigh the liabilities […] An acquirer would also be able to sell Kodak’s commercial and consumer printing businesses and the digital camera unit for at least $2.5 billion, he said.

Buyers may include Microsoft, the world’s largest software maker, Samsung, the Suwon, South Korea-based maker of Galaxy phones and tablet computers, and Google, according to Luskin.

That’s crazy — can you imagine Google or Microsoft buying Kodak to strip it of its patents and then selling off the corpse to some other camera maker? No wonder Kodak adopted a ‘poison pill’.