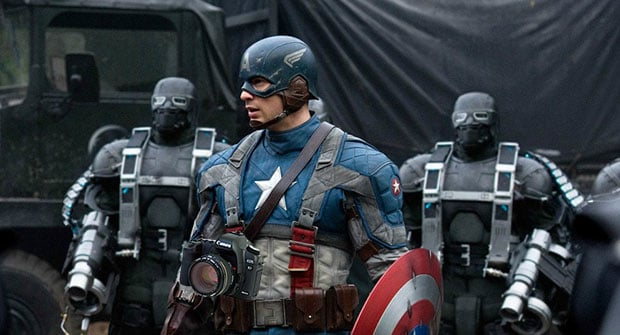 The video recording quality of DSLRs has gotten to the point where you can slap them onto big fancy rigs and use them to film portions of big budget Hollywood movies without anyone noticing any difference. Iron Man was the first superhero in the Marvel universe to make use of the Canon 5D Mark II, and today it was announced that the camera was also used extensively throughout “Captain America: The First Avenger”.

[…] Action scenes in “Captain America: The First Avenger” in which [Second unit DP Jonathan Taylor] used 5D Mark II cameras for POV shots include a car chase and crash, and a high-speed motorcycle pursuit. The small size of the camera enabled Taylor to mount it on the interiors and exteriors of moving vehicles to capture dramatic action shots. The camera’s size also ensured that it was “invisible” to the film cameras shooting the same scene from a distance.

So basically, in certain scenes, a Canon 5D Mark II was actually recording from within the scene itself!